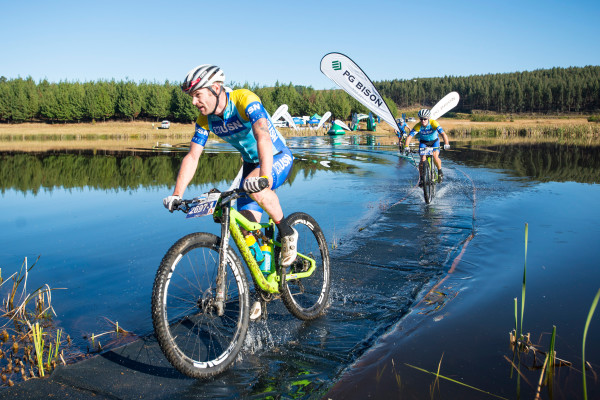 The USN-Purefit pair of Darren Lill and Waylon Woolcock (front) were the strongest pair on the course on Thursday which was the first day of the Race event at the 2016 KAP sani2c. Anthony Grote/
Gameplan Media

MacKenzie Club, Ixopo – The 2016 KAP sani2c’s Race event got off to a blistering start on Thursday as one of the best mountain biking fields assembled in years were blown away by defending champions Darren Lill and Waylon Woolcock who took line honours whilst it was the expectant Robyn de Groot and Jennie Stenerhag who took the spoils in the women’s race.

The USN-Purefit pair of Lill and Woolcock were just as dominant as they were in 2015, putting some significant daylight between themselves and the second placed duo of Johann Rabie and HB Kruger of Team Telkom.

“In a short, fast race like sani2c, you basically have to pound it from the beginning,” Lill said after their stage one victory.

“You need to try and put the rest of the teams under pressure and that is what we set out to do today and we are happy with our two minute lead over second and third.”

The Queen stage on the second day of the event is often seen as one which shakes the race up and Lill is under no illusions about how tough it is still going to be with their 2015 second stage potentially playing on their minds.

“Our advantage does not mean that the race is sewn up by any means because anything can happen on the second stage of the race, but it does take the pressure of having to chase off us.

“The pressure is actually now on the guys behind us because they have to try and win back the time.

“Last year we were in a good position until I picked up a puncture with about 20 kilometres to go and put us under pressure, but hopefully nothing like that happens tomorrow and we are just looking forward to enjoying the stage,” a relaxed Lill added.

It was a difficult day out for the NAD Pro MTB Team duo of Gawie Combrinck and Nico Bell, who had to fight hard to keep within touching distance of the two teams ahead of them as they powered home in third place.

“I could still feel that we haven’t quite recovered from joBerg2c,” a visibly disappointed Combrinck said. “We just didn’t have the legs today after the guys really made it hard from the gun on the first single track and we battled to stay with them.”

“We managed to close the gap towards the end but we couldn’t get passed the other guys.

“The first stage is usually the worst for us so hopefully tomorrow the legs will feel better and we can make up some time.”

The ladies race was a full-throttle battle from start to finish as the Dorma Time Freight pair of Candice Neethling and Vera Adrian put the more fancied Team Ascendis Health brace of De Groot and Stenerhag under unexpected pressure, forcing the latter pair to dig deep towards the end of the stage.

“The race got a bit tighter than we would have liked!” current South African Marathon Champion, De Groot admitted. “We made a slight tactical error when we stopped at water point two and Candice and Vera rode through, leaving us with a big chase and we only caught them just in time to take the stage win!”

“It is always fantastic have some good competition though and it sets up the race for some really exciting days of racing tomorrow and on Saturday.

“It is great to see Vera and Candice racing so well as it makes the entire race more exciting for everyone, which is great!”

Swedish star Stenerhag has been on the road to recovery recently following a heart operation earlier in the year and the first stage of the sani2c was one of her first real hit outs since her surgery.

“I am feeling fine,” mentioned Stenerhag. “Although I know that I am not in the best shape of my life, I am feeling alright and looking forward to tomorrow!”

“It was nice to have Jen back next to me and also all the support that we got out there today!” added De Groot.

In what was an eleventh hour entry, the Sasol Racing duo of Catherine Williamson and Johan Labuschagne were the strongest mixed pair on the day.

As Labuschagne goes in pursuit of another sani2c mixed title, the pair opened up a two minute lead over the Team Garmin pair of Yolandi du Toit and Ben-Melt Swanepoel, a handy lead going into Friday’s second stage.

The first, a serious fall during the steep descent into the legendary uMkomaas Valley that many onlookers believed would spell the end of the pair’s race.

The duo managed bounce back though, only to then to have to deal with a slipping seat post issue for the remainder of the testing Queen stage.

Thursday’s action also saw the curtain come down on the first of the 2016 KAP sani2c events – the Trail, which got underway in Tuesday – with broad smiles on the faces of all those who successfully navigated their way down to Scottburgh Main Beach.

Friday sees all the action of the third and final day of the Adventure unfold from Jolivet Farm to Scottburgh Main Beach while the Race’s racing snakes head off on their second stage from MacKenzie Club to Jolivet Farm. More information can be found at www.sani2c.co.za.