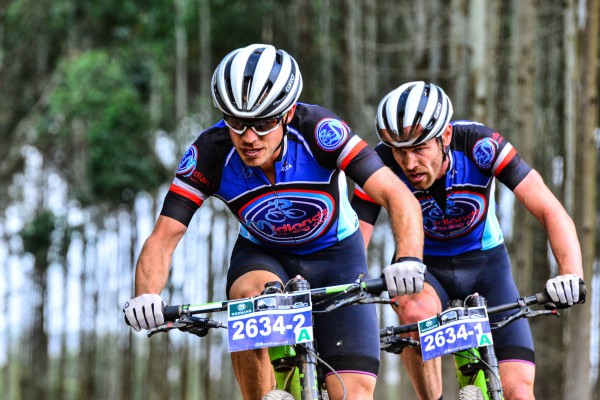 The lead Blend pair of Darren Lill (front) and Waylon Woolcock (back) never gave the other pairs a sniff of victory as they maintained their lead and even added another stage win during the third and final stage of the Race at the 2015 Nedbank sani2c on Saturday. – Darren Goddard/
Gameplan Media

Scottburgh – Blend’s Darren Lill and Waylon Woolcock triumphed at the end of a final stage laced with drama to claim the 2015 Nedbank sani2c title over EAI Wheeler’s Johan Rabie and Swiss speedster Konny Looser whilst the dominant RECM pair of Cherise Stander and Ariane Kleinhans dominated once again to claim an emphatic overall women’s victory at Scottburgh on Saturday.

The 84km final stage was going to prove a challenge for the chasing pairs as they had to make up the time on the leading duo but Lill was quick to point out that the tactics were never to sit and just conserve their 28 second lead, they wanted to make the chasing pairs work to try and make up those precious seconds.

“We had a slender lead coming into today and we went out and attacked positively from the start,” Lill said on the finish line. “We really wanted to put the others on the back foot rather than them putting us on the back foot.”

Four teams broke away at the front with the Biogen-Volcan duo of Kevin Evans, who is heading for retirement after a stellar sani2c career and Max Knox determined to go down battling, until they were sidelined by yet another chain failure. Soon the RECM duo of Nico Bell and Erik Kleinhans fell back, leaving Lill and Woolcock duelling with Rabie and Looser into the grandstrand finish on Scottburgh’s main beach.

Looser took a wrong turn as they approached the 600m long floating bridge over the lagoon, and, rattled by that mistake, fell into the river, ending the race for stage honours, and leaving the door open for Lill and Wollcock to coast home to claim the title in style.

“We got caught behind a cane truck through one of the cane plantations but we just stuck to our gameplan and weren’t under too much pressure at any time today fortunately and had no technicals or any other issues and we happy to take the stage win at the same time,” he added with a dusty smile.

Lill has been working hard in KwaZulu-Natal over the past few weeks and having a strong partner like Waylon to work with throughout the race this week Lill was impressed with their efforts and with themselves stating before the race that they were racing for their futures in the sport a win was close to all they could afford.

“The race just really boiled down to motivation for us this week and I think I surprised myself these last few days.

“I didn’t think that I was going to be going as well as I ended up going and I will take it and just really happy to come home with a win,” he mentioned.

Going into the final day the EAI Wheeler’s team knew that they had their work cut out for them to overturn their overall deficit and Rabie understood the difficulty of reversing a gap like the one they needed to.

“We kept on trying the whole way through today but it is a fast stage and it is difficult to close a gap like that one the last stage but we gave it our all today,” he said.

“We should not have lost all that time on the first stage and Konny had just travelled from Europe so I think his legs and his body were still a bit tired but we will see what happens next year.

“Second last year and then second again this year so hopefully next year I can win it!” he mentioned at the end of the race.

It was another tough day for the sani2c’s most decorated pair Evans and Knox as the Biogen/Volcan pair endured another mechanical on the final stage of the race but Evans appreciated that he has had a stellar run at the event over the years.

“It was just one of those things that happens I suppose,” speaking about his broken chain. “You have seven years of good luck at this race and then the eighth time brings bad luck so it is what is and we don’t take it personally.

“It’s a pity it happened on my last one but coming to the end of my career and still managing fourth at sani with the mechanicals that we had is by no means a simple feat so we will take the fourth with a smile,” a satisfied Evans added. 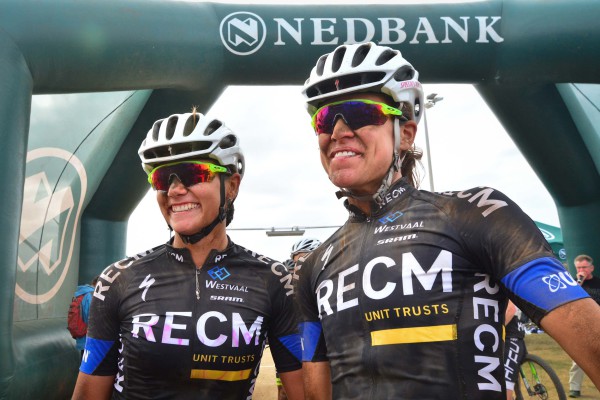 The winning RECM pair of Cherise Stander (left) and Ariane Kleinhans (right) were dominant throughout the race and rightfully smiling at the conclusion of the third and final stage of the Race at the 2015 Nedbank sani2c on Saturday. – Darren Goddard/
Gameplan Media

The ladies race was a one-sided affair going into the final stage and it was going to take major problems to prevent the RECM team of Cherise Stander and Ariane Kleinhans from winning the overall title however they were faultless once again and Stander explained the significance of the win.

“The sani2c has some amazing memories for me and this basically where my mountain biking career started through Burry so it is obviously very special,” she revealed. “The venue, the people and the race are spectacular so it is definitely one of my favourite stage races on the calendar.”

Kleinhans was all smiles when she spoke about the race.

“We had absolutely no issues on our Specialized bikes and it was all perfect for us and riding with Cherise is always amazing and she really knows the course and we are really happy to take all the stages and the overall classification,” Kleinhans mentioned.

The impressive SasolRacing pair of Johan Labuschagne and Yolandi du Toit won their third stage of the race and finished with a six minute wedge between themselves and the RMB Change a Life couple Martin and Jeannie Dreyer with Haaskat’s Russell Lund and Anneke Hanekom finishing in third in the mixed category.