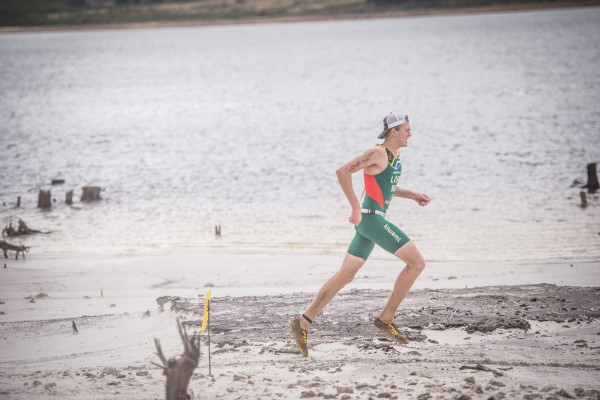 Just over 1200 multi-sport athletes and outdoor enthusiasts flocked to the picturesque Grabouw Country Club on Saturday, 21 February 2015 to partake in the adrenalin pumping TOTALSPORTS XTERRA Lite presented by REHIDRAT® SPORT.

“Out of all the triathlons that I’ve taken part in over the past eleven years, the Totalsports XTERRA Grabouw Lite is the best,” said an ecstatic Lord.  “This is the best route and the best organised triathlon by far, definitely my favourite race of all times.  I swam with Michael Ferreira and Ruan Van Zyl.  On the bike I went out super hard on the first climb, from there onwards I was pretty much alone for the rest of the race.  The run route is amazing.  I was just smiling the whole race”.  Jean-Paul Burger came in second, while Michael Ferreira finished third.

Preen claimed victory after her first attempt at the individual women’s race.  “I’m not a great swimmer, but I had a good swim, exiting the water in the middle of the pack.  My cycle was good, while my run was great.  I’d recommend this race because of the vibe and if you’re not strong enough to race individually, you can enter as part of a team”.  Jessica Alcock came in second, while Charne Dry finished third.

The Totalsports XTERRA Grabouw Lite presented by REHIDRAT® SPORT saw XTERRA Warriors having to complete a 400m swim, followed by a 12.5km mountain bike discipline and a 6km trail run.

Taking the form of the South African Championship, the TOTALSPORTS XTERRA Grabouw presented by REHIDRAT® SPORT forms part of the XTERRA World Tour.  Athletes competing at this event stand the chance to qualify for the world championship final in Hawaii later this year.