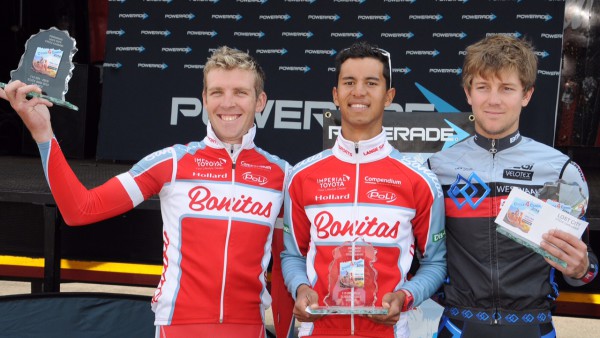 The Powerade Lost City classic, presented by Bestmed, will be looking for a new champion when the 115km road race rolls out near Rustenburg on Saturday. Last year’s race was won by Jayde Julius (centre), with Tyler Day second (right) and Herman Fouché third. Photo: Jetline Action Photo

The Powerade Lost City classic, presented by Bestmed, will be looking for a new champion when the 115km road race rolls out near Rustenburg on Saturday.

Reigning winner Jayde Julius will not return to defend his title in the North-West Province race as he is currently training in Europe ahead of his debut as stagiaire for ProContinental outfit MTN-Qhubeka.

Last year, the young climber surprised South Africa’s top sprinters when he got the jump on them in the final uphill drag to claim a sensational win in the first of the spring classics.

Spokesman for the organisers, Wynand de Villiers of ASG Events, said Julius’s break with 300 metres to go had been one of the most memorable finishes in the event’s 17-year history.

“It was a strange finish because it’s very difficult to outfox the sprinters in the last kilometre but it shows that all it takes is a moment’s hesitation for someone to get away.”

De Villiers said it was this unpredictability that made the fast and flat race one of the most interesting on the national calendar.

“The Lost City race is generally the first indicator of which cyclists are in good form coming out of the quieter winter months and who should go well in the second half of the season.”

He said the route favoured the fast men but that a strong wind could play into the hands of the more powerful riders and shake up the peloton on the day.

De Villiers said Emperors Palace Classic winner Herman Fouché  (Bonitas), who finished third at Lost City last year, was always a threat; while two-time champ Nolan Hoffman (Abantu) was coming back from injury and could be looking to add a third title to his name.

All-rounder Willie Smit (EuropcarSA) has also demonstrated his versatility with recent wins in both the Bestmed Jock Tour and Clover Tour.

“Although it remains to be seen whether all the tour riding has taken its toll, Smit could have ridden himself into form for a classic win,” said De Villiers.

Smit certainly showed his turn of speed by winning both the Jock and Clover Tour individual time-trial stages en route to overall victory.

His teammate Ryan Gibbons claimed the overall sprint classification in each of the multi-stage races and could be another young champion in the making.

The road race, which is also an official Premier Seeding Event for the 2016 Cape Town cycle Tour, is the feature race of the Lost City Cycle 4 Cansa weekend.

The festival draws to a close with the Bestmed Lost City mountain bike races – including the 55km, 25km and 1km kiddies’ distances – on Sunday.