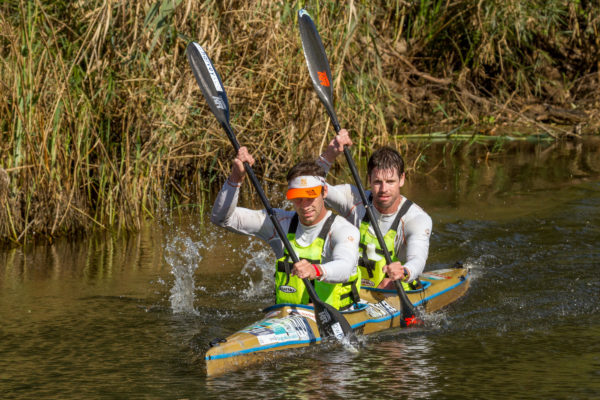 Greg (front) and Ryan Low power away to win the final stage of the Breede River Canoe Marathon on Sunday. “Because we raced the same section that we raced on the first day, everyone had learnt a few tricks so the racing was far harder and more tactical,” said Ryan Louw. Kassie Karstens/Gameplan Media

They started the shortened 17km final stage from Riggton Farm to Drew Bridge with the Under 23 speedsters Alan Houston and Stew Little on their wave, but the Louw brothers took their chances well on the final leg to shake off them off and win their first Breede title by more than two minutes.

“Because we raced the same section that we raced on the first day, everyone had learnt a few tricks so the racing was far harder and more tactical,” said Ryan Louw.

“The crews were all feeling each other out on the first stage but today the racing was much harder. The intervals were hard and all the top boats upped the ante, even though the river was actually a bit lower,” he added.

Third placed overnight the crew of Shaun Rubenstein and Clint Cook took the bull by the horns and scorched into the lead early on, before the Louw brothers pounced on an opportunity about half an hour into the race and went back to the front.

“We wanted to make that stick and put in an interval, which got us a decent gap.” said Ryan Louw. “We didn’t want to risk being in a bunch as we got to the end of the race and to risk making a small mistake that could hand the lead to someone else.”

“Mission accomplished!” said his brother Greg Louw. “While it was low it was still really good fun, and it was a good training session for the Hansa Fish in a few weeks’ time, which is our main goal for this season.

“We have one of this combinations as brothers where we can just jump into a boat and go, which helps a lot,” he said. “Paddling with your brother is not without it’s challenges, but it is never a mission!”

Clinton Cook and Shaun Rubenstein duly wrapped up the last spot on the podium, well clear of the fourth placed boat of Anders Hart and Dom Notten.

Simon Van Gysen won the singles category with an excellent fifth place overall, testimony to how the K2 struggled on the low river, with Phillip Smith the second single close behind in sixth.

The only change to the top ten on the final stage was Ernest van Riet and Bartho Visser dropping two places to seventh as the singles paddlers leapfrogged them in the low river.

More information can be found at www.breedemarathon.co.za