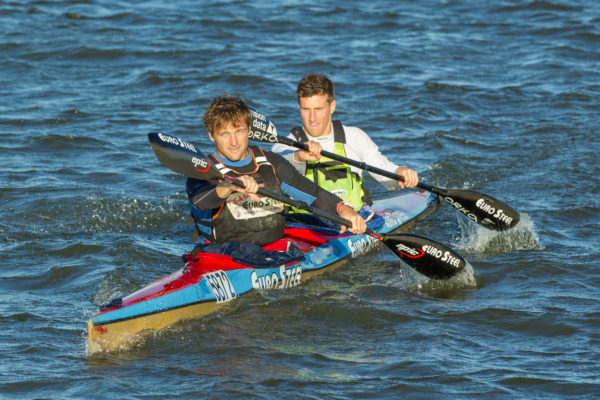 Robertson – Defending champion Stuart MacLaren has thrown the cat amongst the pigeons by taking up the 2016 Breede River Canoe Marathon challenge on 3 and 4 September with another former winner, and Euro Steel team mate, Jasper Mocké, ending chances of defending the title he won with veteran stalwart Graeme Solomon last year.

The new combination with Mocké is something of a work-in-progress, and they plan to use the weekend races in the build-up to the Breede Marathon to fine tune the boat set-up.

“Jasper and I paddled together at the Western Cape sprints (where they won the 1000m K2 title), and we did a time trial together this week,” said MacLaren. “He is a machine in the boat!”

“We will be racing the Alfies to Robertson race this weekend together to see how the boat works with Jasper driving. We might try it both ways to see which works best,” added MacLaren.

MacLaren said that the decision to split up the winning combination was not hostile and would add some attractive spice to this year’s race.

“Solly (Graeme Solomon) has a tradition of winning the race with one partner and then coming back the next year with some-one else and winning it again,” chuckled MacLaren.

“You can never ever write Solly off. He is a legend,” said Maclaren. “I can’t wait for the Breede as there are suddenly an lot of really good boats coming together, which is really cool.”

For Euro Steel athlete and expectant father Mocké the decision to do the Breede just two weeks before his ICF World Championship challenge in the K2 race with Hank McGregor is all about a last competitive hit out before starting his taper for the global title decider in Germany.

“My worlds partner Hank McGregor said that he couldn’t make the Breede because he has commitments in Durban that weekend, and I wanted to have a strong race two weeks before worlds,’ said Mocké.

“The Breede season in the Cape is great because there are races every weekend and they are really competitive, which is what I enjoy. Stu and I combine nicely in the boat and we will experiment with the combination in the weeks before the Breede.”

Mocké can now turn his attention back to marathon boats after a month of travel abroad where he took part in several surfski internationals, including an encouraging wind at The Gorge Downwind Championships in Columbia.

“June and July was a bit of a low point for me so the surfski trip was good for me. I have managed to revive my joy in paddling and I am not putting any pressure on myself,” said Mocké.

Mocké is looking forward to the change of gears and getting back onto the Breede, where he notched up his first major win in a river marathon when he teamed up with Tom Schilperoort as an all-surfski combination to outsmart a very strong field that included several world champions to win the title.

“That was one of my fondest victories,” recalls Mocké. “The field we were racing against was very strong, and Tom and I managed to sneak into a channel and get a couple of hundred metres lead with ten kays to go, which we managed to hang onto.”

With the contender crews starting to take shape, the rumour mill points to Solomon luring Eastern Cape ace Greg Louw as a partner for a possible seventh title.

The 2016 Breede River Canoe Marathon takes place on 3 and 4 September. More information can be found at www.breedemarathon.co.za