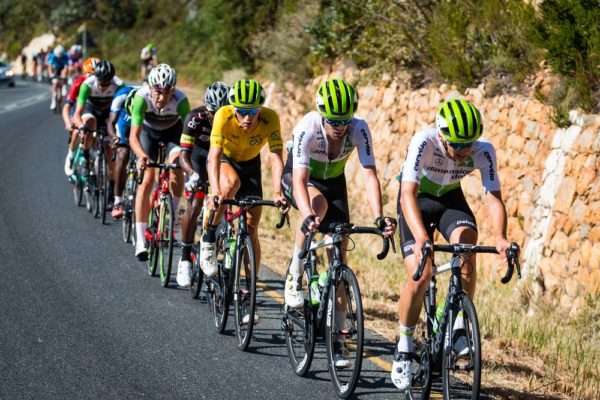 Dimension Data Continental riders Italian Matteo Sobrero, Kent Main (second) and Stefan de Bod (yellow jersey) lead the bunch on the third stage of the Bestmed Tour of Good Hope, presented by Scicon and the City of Drakenstein, today. The 137km stage ended at the top of Dutoitskloof Pass near Paarl in the Cape Winelands. Photo: Robert Ward

Defending champion Kent Main repeated his triumph of a year ago as he climbed to victory on top of Du Toitskloof Pass on the third stage of the Bestmed Tour of Good Hope near Paarl today.

The 137km queen stage of South Africa’s premier road stage race, which is presented by Scicon and the City of Drakenstein, saw the DiData Continental team scoop the top three placings.

Main, a 22-year-old pro from Johannesburg, and teammate Stefan de Bod, who won the overall title two years ago, crossed the finish line together in 3:39:56.

Completing the clean sweep of the podium was Italian Matteo Sobrero, who got the better of Gustav Basson (ProTouch) in the closing metres.

With two stages left, De Bod provisionally leads the race ahead of Main and Basson.

The key element in their success during the stage, Main said, was their teamwork.

He and teammates Luca Mozzato and Louis Visser were part of a breakaway group that went clear after 40km and, although they were later joined by De Bod, their efforts came to nothing as the peloton reassembled before the start of the finishing climb.

“Luca then started off things at the beginning of the climb, keeping the pace nice and high,” said Main, who won the tour in a heart-stopping grand finale by one second last year.

“He and Ollie [Jones] did a good job. Once they peeled off Matteo did a massive job for us with a bit of a surge, bringing it down to about five riders at the front.

“From that position, with about 4km to go, I did a small acceleration to get rid of the last riders, leaving just Stefan and myself.”

He said they worked together until the finish, riding conservatively but putting in some harder turns to open the gap to their closest challengers.

“The biggest thing I can say today is that it was a perfect team effort. If it wasn’t for that, it would not have worked out so well for us in the end,” said Main.

“My teammates were able to put pressure on the rest so by the time they reached the climb they were already battling a bit.”

The stage winner said they rode fairly conservatively in the early breakaway.

“When Stefan came across to us, we tried to open up a gap, but, because of the nature of the course, a lot of guys came back to us.

“We knew BCX were chasing for the sprint points so we sat up and waited for them until the 115km mark and had a free ride all the way to the climb.

“From there, everyone did a massive job for the team and as a unit we really worked well together.”

Although he felt his form was better than 12 months ago, he reiterated that there was still a lot of work to be done.

“The tour is not over yet and anything can happen,” said Main, suggesting that they would continue to ride aggressively to limit the stress of anyone dangerous getting in a breakaway.

Spur’s Ariane Luthi consolidated her place at the top of the standings with her second stage win in as many days.

She stopped the clock on 4:20:39 to beat Carmen Buchacher (dormakaba) and Lucy James to the line.

Luthi, who won the individual time-trial yesterday, led a breakaway of six after an attack by Buchacher had spread the field. Their breakaway companions were national road champion Carla Oberholzer (Demacon), Namibian Vera Adrian and Catherine Colyn.

“We basically rode to the start of the pass fairly slowly, but Carmen then started pacing quite hard.

“Even though the legs were starting to hurt a bit, I felt comfortable with the pace.

“I thought Carla was my biggest threat for yellow,” explained Luthi.

“When I looked back and saw her suffering a bit, I pushed harder and was able to force a split in the final few kilometres. Carmen and Lucy stayed with me.”

From that point, it became a tactical battle, but she managed to surge ahead in sight of the finish and was able to maintain the gap.

“I am very pleased to win the stage and keep the yellow jersey. In comparison to last year, I feel 100 times better and that’s important.

“I do feel confident, but in road racing anything can happen and I will not be underestimating anyone over the last two days.”

Tomorrow’s fourth stage – the same one that was cancelled due to high winds last year – is over 134km with an equally challenging 2 900m of climbing.