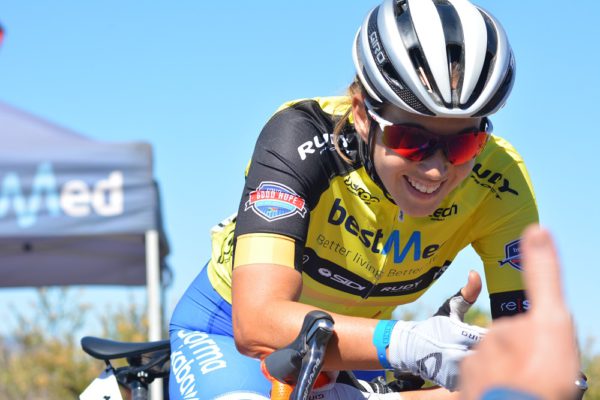 Candice Lill of dormakaba savours her victory in the Bestmed Tour of Good Hope road race that ended at the Taal Monument near Paarl today. Photo: Full Stop Communications

RoadCover’s Kent Main ticked a significant item off his bucket list when he was crowned Bestmed Tour of Good Hope champion in a sensational finale at the Taal Monument near Paarl today.

In one of the tightest finishes to any road tour in South Africa, Main powered his way up the steep climb to make up a 51-second deficit on Pro Touch’s overnight leader Myles van Musschenbroek to snatch the title by a single second.

It was an agonising outcome for the 24-year-old Van Musschenbroek, made more excruciating by a wait of about 15 minutes before the timekeepers were able to confirm the final standings.

Main ultimately clocked an overall time of 8:31:22 over four stages after the penultimate stage was cancelled due to extreme winds yesterday. His teammate Eddie van Heerden completed the podium in 8:32:22.

After forcing his way into overall contention with a fourth-place finish in Tuesday’s individual time-trial, Van Musschenbroek put in a desperate effort to protect his lead up the final climb, but Main’s power on the hills ultimately made the difference.

Afterwards the 21-year-old Main, from Linden in Johannesburg, said he felt the first major victory of his career was a result of a more structured programme he implemented last year.

“With the help of my brother I set up a plan halfway through last year aimed at training for this tour, but I always knew it would be hard to win.

“I have often said to my mates this is one of my favourite races and one I always wanted to win. Now that it’s happened, I’m really happy and it will boost my career going forward.”

He paid tribute to his Johannesburg rival, who fought all the way to protect his overnight lead.

“Myles was able to manage everything that came his way today and his team looked after him really well.

“We could not have done more to attack him and to eventually win it by one second is more than I could have hoped for.”

Van Musschenbroek, who lives in Rosebank in Johannesburg and works full time, was exhausted by his final effort and said he “was seeing stars and felt dizzy” at the end.

“Our team has never been in this situation so from the start it was a learning experience. But my teammates rode perfectly to control the race.

“I was a bit stressed out during the stage, probably from putting pressure on myself, and I gave it absolutely everything I could on the last climb.

“But Kent put up a great fight. It was fantastic for the race and he deserves the win.”

Candace Lill of dormakaba claimed the women’s title by finishing fourth on the stage to comfortably protect the two-minute lead she had going into the final day.

British rider Chanel Mason and Bestmed-ASG’s An-Li Kachelhoffer had an intense duel for the stage honours on the climb up to the Taal Monument, with Mason just outlasting her rival. Team Spur’s Ariane Luthi finished third.

The overnight leader, from Sun Valley in Cape Town, said she went into the stage with her priority being to defend the yellow jersey and that she had to contend with some attacking racing throughout the stage.

“The women really gave it their all today – I know there were five seconds between third and fourth so people were fighting for the podium,” said the 25-year-old.

“I think that’s great. That’s the sort of aggressive racing we want to see in women’s cycling.”

Lill said the final climb had been a real test for the riders.

“This climb has everyone on their limits and it’s just a matter of hanging in there until the end.”

With a strong background in mountain biking, she was delighted to secure her first win in a road racing event.

“I’m so happy I came out on top, but I think in a way I was quite surprised.

“Obviously I’m training for the Cape Epic so I’m fit. To win a road race was a big accomplishment for me and this was a good test.”

King of the Mountains: Kent Main

King of the Mountains: Jaco Cronje

King of the Mountains: Jamie Anderson

King of the Mountains: Douglas Burger