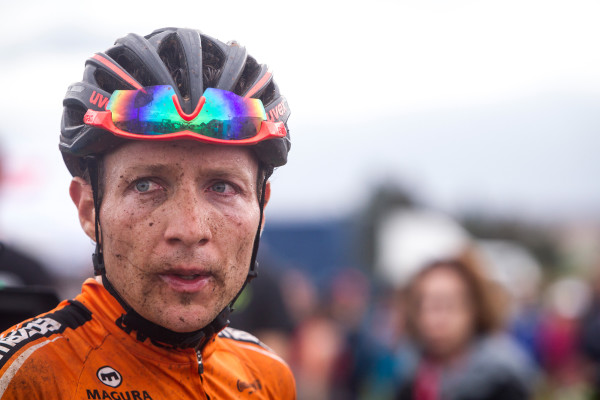 Germany’s Markus Kaufmann, one of the pre-race favourites for the 2015 Absa Cape Epic, has had to pull out of this years Absa Cape Epic – SPORTZPICS.NICK MUZIK.

Germany’s Markus Kaufmann, one of the pre-race favourites for the 2015 Absa Cape Epic, has had to pull out after breaking his collarbone in the Andalucia Bike Race in Spain.

Kaufmann was due to ride again with countryman Jochen Kaess this year and they had been tipped as potential winners. Kaess will now team up with young Austrian Daniel Geismayr.

In 2014 Kaufmann and Kaess led the Absa Cape Epic after a commanding Stage 1, but the next day Kaufmann’s chainstay broke and they lost nearly two hours – ruling them out of the race for overall honours.

They went on to play a significant role, however, when they twice donated their wheels to eventual winners Robert Mennen and Kristian Hynek after the Topeak Ergon riders had picked up punctures.

Team Meerendal issued this statement at the weekend: “Unfortunately Markus Kaufmann broke his collarbone during Stage 5 of the Andalucia Bike Race and will no longer be able to participate in the 2015 Absa Cape Epic. We wish Markus a speedy recovery and hope to see him back in the Meerendal kit very soon. Daniel Geismayr will replace Markus, and together with Jochen Kaess he will form ‘Team Meerendal Centurion Vaude’.”

Geismayr is a 25-year-old with great potential who finished 13th in the 2012 Absa Cape Epic, the only edition of the race he has entered to date.
Absa Cape Epic spokesperson Chris Whitfield said the event also wished Kaufmann a speedy recovery and looked forward to seeing him taking part again in 2016.