Maties men up for Berg challenge 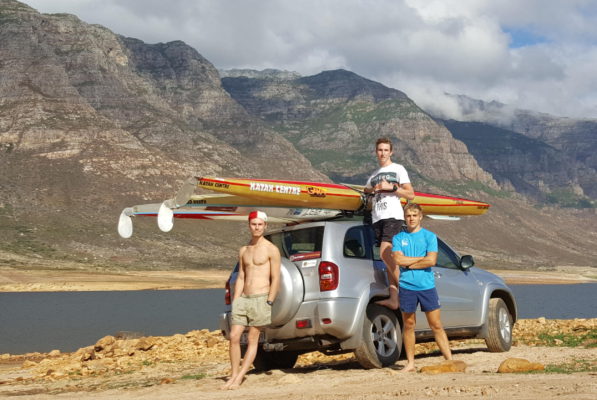 Training Trio. Maties paddlers Carlisle Hartman, Dustin Starr and Evan Knight training at the Berg River Dam in preparation for the Berg River Canoe Marathon. “We are all KZN guys, with plenty of Dusis and Draks behind us, so the Berg is a totally new challenge,” said Knight. Supplied/
Gameplan Media

Paarl  – A core group of five students from the University of Stellenbosch has committed to taking on their 2017 Berg River Canoe Marathon, many of them Berg novices, undaunted by the distance of the four day race or the consequences of the drought ravaging the region.

Maties canoe club captain Evan Knight says the group has been putting in the hours on the nearby Berg River dam, and will approach the 240km race to West Coast town of Velddrif with different goals.

“We are taking it as a challenge,” said Knight. “We all want to test ourselves and be pushed to the limit. Individually the guys have set their goals, but as a group the challenge is to finish the Berg.”

Knight joins Alan Houston, Brandon Macleod, Mike Jamieson and Carlise Hartman in Maties colours for the race that starts on 12 July in Paarl.

Houston has a fourth in the FNB Dusi to his credit, racing with his older brother Andrew in a K2 race, and also started last year’s Berg before going “missing in action”.

Knight tipped Houston to front the Maties challenge, but added that the group would work together wherever possible.

“We are all KZN guys, with plenty of Dusis and Draks behind us, so the Berg is a totally new challenge. The lack of water in the river makes it harder because we can’t go tripping, so the race will be a bit of an unknown for most of us,” he said.

Knight said that the unique make-up of the Maties club, which also includes older paddlers, will help the students.

“We have a great vibe at the club, and the older guys really help out and encourage us. They have so much experience, and guys like Daantjie Malan and Anthony Penderis really contribute a lot to the club.

At a stage when only eight entries had been received for the race Knight was proud that half of them were Maties paddlers.

“That’s the way we are approaching the Berg. We are in, no matter what the water or the weather. We are up for the challenge,” said Knight.

The Berg River Canoe marathon starts in Paarl on 12 July and ends at Velddrif on 15 July. More information can be found at www.berg.org.za