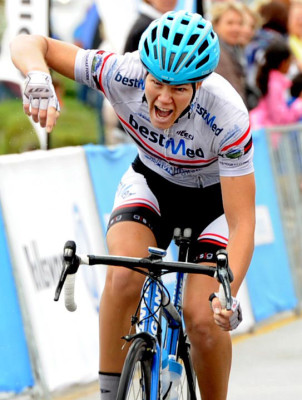 Multiple South African champion Maroesjka Matthee turned in yet another dominating performance at this year’s national track championships, which culminated at Hector Norris Park in Turffontein, Johannesburg, on Saturday afternoon.

The Team Bestmed-ASG-Multihull star took home a total of seven golds, one silver and a bronze medal in the elite events to set her seal on the five-day competition at the outdoor velodrome.

She was also part of the Western Cape squad that set a new SA record en route to gold in the team pursuit.

In addition, the 26-year-old finished third in the 500m time-trial and had to be content with second place in the team sprint.

“Going in I knew that the time-trial would be my Achilles’ heel and the hardest one to win,” she said.

“It’s a very specialist event. I have natural speed, so I can get away in the sprints but the 500m is from a standing start, so you have to have power and train specifically for that.”

Matthee said the team sprint silver had been especially frustrating as her provincial squad had been the outright favourites to win.

“On the day my teammate Bernette Beyers didn’t have a great start and couldn’t get on my wheel and into my slipstream, so she had to ride the whole lap on her own and we lost that one.”

The Brackenfell resident said she had been disappointed not to make a record clean sweep after winning eight out of nine events last year but was nevertheless pleased with her general performance.

“The competition was a lot stronger this year so overall I’m pretty happy with how the week has gone. My speed is still up there and so is my endurance.”

She said her form was a far cry from the psychological low she had hit a fortnight before the event, after a jam-packed early season that included winning the omnium at the continental champs, competing at worlds and finishing on the podium at the Cape Town Cycle Tour.

“It’s been a long year already, with a lot of excitement physically and mentally. But this week’s results have got me fired up again for the second half of the season.”

Matthee said her successful introduction to road racing had only helped to build her endurance levels and strengthen her track riding ability.

The all-rounder said her next major goal would be to defend her SA omnium title in Durban.

“My aim is also to do some Grand Prix and UCI class one and two events in Europe, and then I have the option to do some road racing too.”

Her Bestmed-ASG-Multihull teammate Ashleigh Parsons also had a successful outing this week, winning all five of her events as a first-year U16 rider.

“It’s a really good start for me and I achieved pretty much everything I intended to,” said the former national champion in the U14 age group.

The 15-year-old Wellington-based rider not only snatched a fistful of gold medals but also broke the SA records in the 500m time-trial and 2 000m individual pursuit in the process.