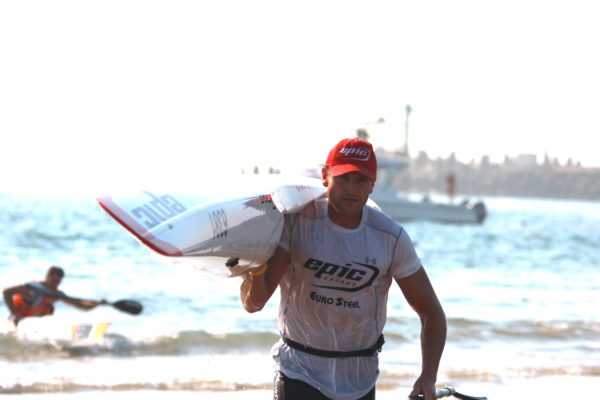 Durban -Fresh from his victory in Mauritius, and days before he jets off to international surfski events in Canada and the USA, Hank McGregor stole the limelight at the opening leg of the Bay Union Open Ocean Challenge Series, holding off Euro Steel team mate and surfski newbie Andy Birkett at the end of the 12km race.

Racing a straight out-and-back course from the series base at Durban Underwater Club to a turn buoy off the uMngeni River mouth, McGregor and Birkett quickly put space between themselves and the chasers Wade Krieger and Gene Prato, despite a scare at the start.

A casual McGregor was slow off the start line after realising that his paddles were incorrectly set up, and wasted time adjusting them from left feather to a right feather set-up. All this succeeding in doing was to excite several other elite paddlers, who felt they had been gifted a chance to get one over the multiple world marathon champion.

That hope was quickly snuffed out as McGregor deployed some of legendary speed to quickly establish himself at the front of the lead pack, and set up the win.

The onshore North-Easterly conditions eased during the weekend, making excellent open ocean racing conditions for the big field to enjoy, with the experienced paddlers able to milk the downwind runs and waves.

“It was a brilliant day to be out racing,” enthused McGregor. “Durban was really showing off and I am glad such a big field came out to enjoy the conditions.”

The Epic Kayaks team racer said that the 12km hit-out was an ideal warm up for his upcoming trip to the US and Canadian surfski events that will occupy his attention for the next two weeks, a tough decision for him as it meant foregoing the defence of his Berg River Canoe Marathon title.

Birkett, who is enjoying his foray into competitive surfski as part of his training for the ICF World Marathon Championships to be held in Pietermaritzburg in September, was equally bullish about the conditions and the intensity at the front of the lead pack.

Under 23 Prato held off Krieger for the last spot on the podium, with another rising star of the sport Bailey de Fondaumiere, rounding out the top five.

The women’s race was equally competitive, with the Durban surfski community boasting some of the world’s best exponents of the sport. The livewire Nikki Russell took the top honours in a close tussle with the new SA champ Michelle Burn and Under 23 Kyeta Purchase.

The weekly Sunday morning now shifts to the Citadel Open Ocean Challenge, starting at DUC at 9am next Sunday, 16 July.

More information can be found at www.oosc.co.za