McGregor gets onto 2015 Durban Downwind scoreboard 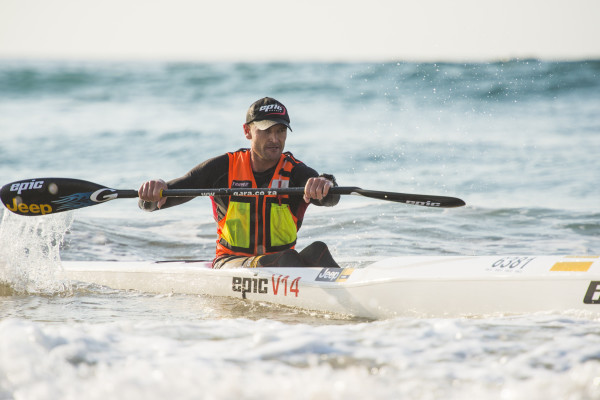 Having missed the five-leg series’ first two encounters on KZN’s South Coast McGregor was eager to put in a strong showing at the world oldest ever surfski race across Durban’s bay and back.

“Pirates Umhlanga Pirates is such an iconic race so it was great to come down and be a part of this year’s race!” said the Jeep Team/Epic Kayaks ace.

“I took it quite easy on the way to Umhlanga and Matthew (Bouman), my dad (Lee McGregor) and I turned about a minute behind Steve (Woods) and Wade (Krieger).

“On the way back I looked to push the pace a little more and it was nice to get the win in the end!” he added.

McGregor believes his Pirates Umhlanga Pirates effort will aid in his preparation for the upcoming island assignment however making the journey with his wife Pippa and young son Thorsten is something he paddling sensation is looking forward to as well.

“On Monday I leave for the Mauritius Classic with the whole family. It will be Thor’s first international trip and our first real trip as a family so Pippa and I really excited and looking forward to a good week over there!”

Throughout the return leg from Umhlanga McGregor was chased hard by Epic Kayaks/SMG’s Matt Bouman however in the end the Salt Rock resident was too strong for his Umhlanga counterpart.

With Fenn Kayaks’ Jenna Ward and young Kyeta Purchase opting to get some invaluable time in the boat together ahead of the Marathon World Champs pairing, Arthur sailed home to clinch the women’s race spoils.

“I didn’t have a great start as I fell out my ski in the surf and then just could not get back in,” chuckled Arthur afterwards. “Once I finally got going then I absolutely loved it, the conditions really suited me in the sense that there was a slight headwind going there and then a light tail wind coming back.”

“I paddled a lot of the way on my own but was then very lucky to find a bunch of doubles and just worked our way towards the finish line.

“I absolutely loved the race and very glad we came down today; it was great preparation for not only the FNB Durban Downwind in a couple of weeks’ time, but Marathon World Champs a little later in the year as well!” added the Fenn Kayaks/Carbonology Sport paddler.

Ward and Purchase went on to win the women’s doubles category and Ryan Atkin and Louisa van Staden the mixed doubles while the overall doubles spoils went to under-18 pair Luke Criticos and Thomas Lovemore who edged out Bruce Wenke and Linton Hope.

“The Pirates Umhlanga Pirates is the oldest surfski race in the world. It started in 1957 and it was lovely to be able to run the traditional route once more this year,” said Fouche.

“Gawie Botha always used to provide soup and rolls at the finish and we’ve looked to continue that tradition here today, which appears to have been really well received by the paddlers.

“We’re really stoked to have had Zurich – a well-established brand in the insurance game – come on board as race sponsor and support us so generously. Their support has enabled us to put on a really good show again here today,” he added.

The ET Security Winkle Challenge, race four of the 2015 FNB Durban Downwind Surfski Series, takes place on 4 or 5 July. The final race date and venue will be announced on the series’ Facebook page on Thursday while more information can be found at www.durbandownwind.co.za