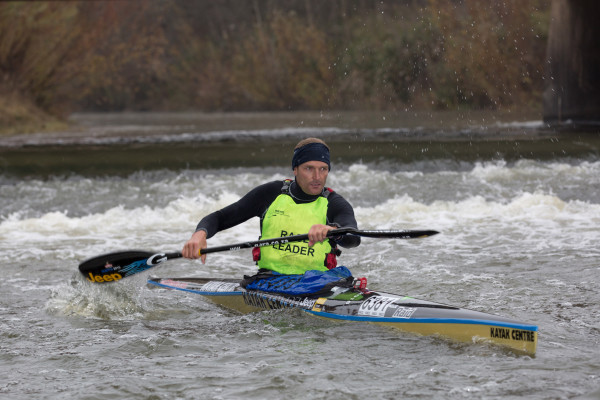 Bridgetown – South African paddling legend Hank McGregor continued his march towards a record tenth Berg River Canoe Marathon title on Thursday when he outlasted the rest of the field during the tough second stage from Zonquasdrift to Bridgetown while overnight women’s leader Bianca Beavitt further extended her massive lead in the women’s race.

Paddling the same stretch of river that was covered during Wednesday’s revised first stage, some may have expected things to be a little easier the second time around however it wasn’t to be for McGregor as he went from start to finish alone.

“It was quite hard starting on my own today and never quite knowing just how hard I was needing to go,” explained the Jeep Team/Kayak Centre athlete. “To pace yourself for four hours when you’re on your own is quite a daunting task.”

“I decided to go out quite hard and try open up a bit of a buffer on the rest of the guys but the first time split I got was at Train Bridge – close to two hours and forty five minutes into the day – so it was pretty tough,” he added.

Starting the day with a near three minute advantage, McGregor looked to ensure he finished ahead of his chasers, regardless of how big his lead may be.

“When you’re on your own your mind also places games with you and while trying to remember where I went yesterday, I unfortunately made some silly mistakes but I’m just glad to have gotten here in one piece and I’m still leading so I couldn’t be happier.

“I said to my wife (Pippa) last night that if I could just make sure I got to Bridgetown at the end of the day with a couple seconds lead – even if I just won the end sprint – then that would be enough to set me up for the next two days.

“To have a buffer of over two and a half minutes is a huge achievement and I’m really happy!” said McGregor.

Friday’s racing sees paddlers bank whatever time advantage they may have notched up over the previous two days and start in batches once more, affording race leader McGregor the opportunity to sit back and mark the moves of his opponents without having to dictate proceedings much himself.

“It’s just been about trying to take things one stage at a time for the past two stages.

“I have two big stages ahead but now it’s back to marathon racing and the tactics that go with that is what I enjoy so hopefully I can sit on someone else’s a wave for a change.

Thursday’s stage victory won’t be the only occasion the McGregor’s will raises a celebratory toast to as the day also marks their son Thorsten’s first birthday.

“I thought about my little boy a couple times while I was on the water today; hopefully one day when’s he older he’ll remember that I won a stage of the Berg on his first birthday!”

Starting some way behind McGregor, defending race champion Andy Birkett had his work cut out for him from the get go however the Euro Steel star soon found good company in Spain’s Kiko Vega.

“I battled to find a bit of momentum in the first thirty minutes and so Kiko Vega caught me quite quickly.

“For the first hour of the race I wasn’t feeling so lekker but we were working well together and so slowly we started building up a bit of momentum even though Hank was still opening up quite a bit of a gap.

“Finally we got some time splits that were a bit more positive and we realised were closing in on Hank a bit,” said Birkett.

Even hunting as a pair didn’t see Birkett and Vega catch McGregor though and instead the pair had to settle for each other’s company for the day, despite very little conversation exchanged between the two.

“It was awesome paddling with Kiko; he’s such a lekker guy and helped me out a few times paddling when I got stuck in some trees.

“Unfortunately we couldn’t chat much with Kiko speaking very little English; I was trying to remember the few Spanish phrases that I know but he kept looking at me quite strangely when I tried to say them so I clearly wasn’t pronouncing them right!” laughed Birkett.

The evergreen Graeme Solomon was another to enjoy good international company throughout the second stage as Czech Republic’s Jakub Adam and Joep van Bakel of the Netherlands soon closed the gap to last year’s runner up with van Bakel (Kanocentrum Arjan Bloem), Adam and Vega going on to post the three fastest times of the day.

In the women’s race Beavitt was once again in a league of her own as she extended her half an hour overnight lead to go into Friday’s third stage with a fifty-five minute buffer over Robyn Henderson and stage two mover Jane Swarbreck.

Not even a second swim in as many days dented the Century City/Pink Lady paddler’s dominance of the women’s clash.

“I’m glad just to have survived!” laughed a relieved Beavitt afterwards. “It wasn’t too bad overall even though I did have one swim – three hundred metres down from the place where I swam yesterday!

“I heard the motor boat coming up behind me and as I turned I went into a tree and over I went.”

With such a sizeable lead, Friday’s longest stage of the race is all about staying out of trouble and keeping company around her for Beavitt.

“Everyone always tries to go into each day with a game plan and then five kilometres in everything changes but hopefully I can get into a good bunch that doesn’t look to work me over too much early on tomorrow and then just staying with them!”

Friday’s third stage starts at Bridgetown and finishes at Zoutkloof before the race finishes at Velddrif on Saturday. More information can be found at www.berg.org.za