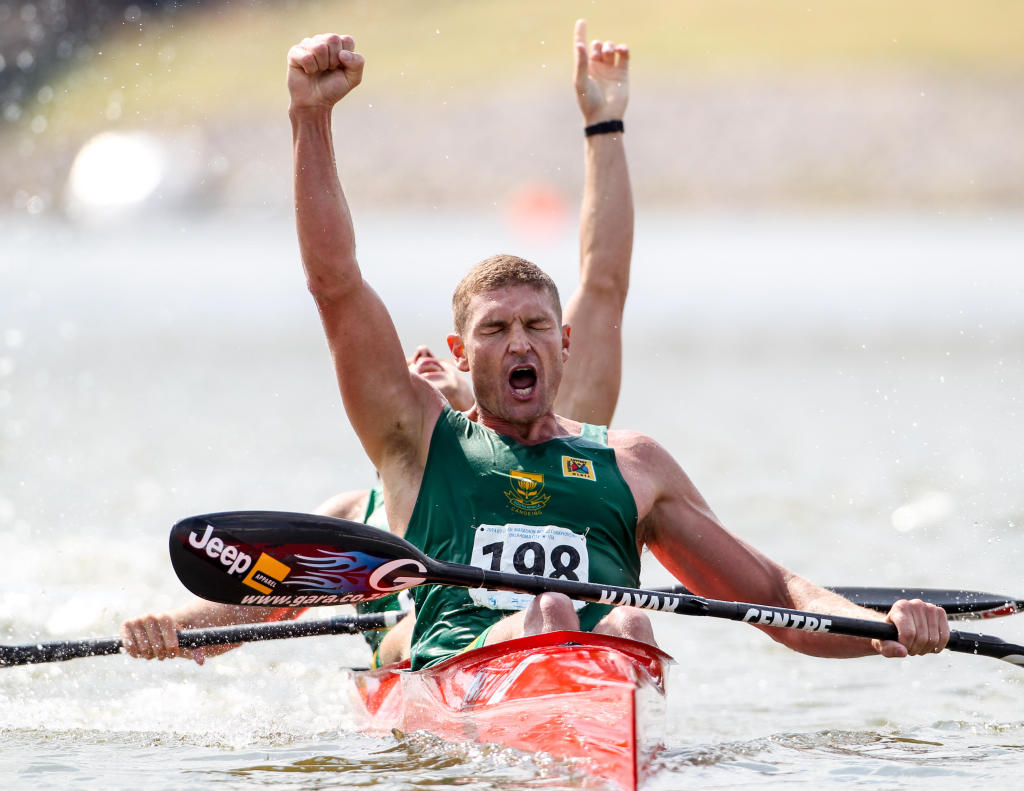 Hank McGregor and Jasper Mocké (back) cross the line to claim victory in the Senior men’s K2 race at the ICF Canoe Marathon World Championships. The win made McGregor the first South African to clinch the elusive double of K1 and K2 titles at the same world championships – Balint Vekassy/
Gameplan Media

After an emphatic obliteration of the Men’s K1 race on Saturday 36 year old McGregor teamed up with his surfski friend Jasper Mocké to clinch the K2 gold medal in a thrilling four boat showdown that brought the curtain down on the Event on the Oklahoma River.

With both McGregor and Mocké anxious to conserve energy after a hard days singles racing the day before, the race was a very tactical affair featuring two classy Spanish crews in Javier Alonso and Emilio Merchan and Walter Bouzan and Alvaro Fernandes Fuiza and the potent Hungarian duo of Adrian Boros and Laslo Solti.

McGregor and Mocké bided their time and made their move on the final portage, outsprinting the two Spanish boats to put in first and seize the decisive advantage going into the final half lap.

Both Spanish boats were content to ride the South Africans wave, hoping to conserve energy and outspint them in the closing stages, both they were undone by the tenacious pair who found an extra gear as they approach the finish line to win by a boatlength, sending the South African supporting contingent into raptures on the bank.

“It’s a fifth gold medal and the first time that a South African has won both K1 and K2 gold at the same world champs,” said McGregor.

“It was a lot of fun and pretty intense out there. It was pretty tactical. We thought we would try to outwit the two Spanish boats but they were pretty clever,” said a clearly elated McGregor.

Mocké added that the South African norm of racing multi-day river marathons had helped them deal with the demands of back-to-back marathons.

“”Most of our races are two day or even four day races so that’s what we are accustomed to, and I think that helped us in the end. We’re used to multi0day racing,” he said.

McGregor once again dedicated the win to his newborn son Thortsen and wife watching on live streaming at home in Durban.

Team manager Steve Jourdan hailed the event as the most successful campaign at the World Marathon Champs by a South African team.

In addition Team South Africa won the team award for the Men’s Kayak competition, edging out the powerful teams from Hungary and Spain.