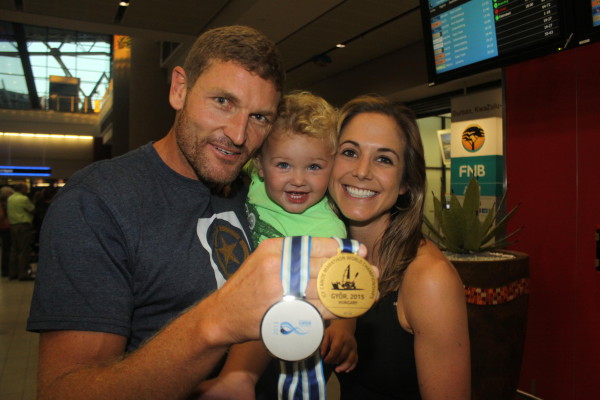 McGregor was met at the airport by a group of friends and supporters led by his wife Pippa and year old son Thorsten, who was happy to handle the brace of medals his dad had to show them.

McGregor said that the weekend had been a whirlwind, and he was slowly appreciating the enormity of this third back-to-back K1 title, a feat that puts his in the same league as the Spanish marathon icon Manuel Busto Fernandez.

“Look, just to be mentioned in the same breath as Busto is an honour, it’s just as important to be to be appreciated by my fellow countrymen,” said McGregor.

“I got a standing ovation from all my teammates when I finally got back to the hotel on Saturday night, after doing the drug testing and missing the shuttle bus.

McGregor has a week to catch his breath and recover before preparing for the long haul flight to Tahiti for the Surfski World Championships, from where he has to rush home to make the start of the Hansa Fish River Canoe Marathon in the Eastern Cape where he is the defending champion.