Meet The Man Who Is Taming The Bulls 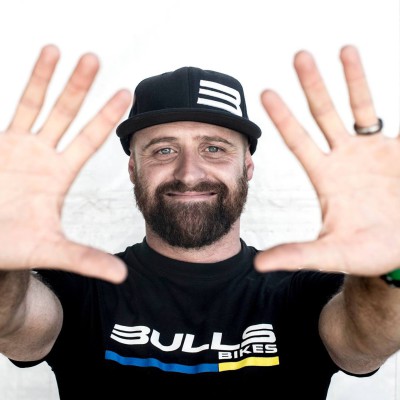 Vincent Durand – Team Bulls’ soigneur, their helper, and one of six people working behind the scenes to give the Bulls’ Karl Platt and teammate Urs Huber every opportunity to get their feet on the podium – FaceBook

Vincent Durand is a matador of sorts – but he doesn’t quite tame the Bulls; he looks after them. Durand is Team Bulls’ soigneur, their helper, and one of six people working behind the scenes to give the Bulls’ Karl Platt and teammate Urs Huber every opportunity to get their feet on the podium. When the riders power over the finish line, Durand springs into action.

“My job is to look after them, treat their bodies, plaster them up and assess them,” says Durand, who has been with Platt since 2005, and by his side for three of his four Absa Cape Epic wins. He travels with the team to all the big stage races over the world.

There are three Bull teams at this year’s Cape Epic – Bulls 1, Bulls 2, who have been exceptionally unlucky this year with mechanicals and a bad crash that saw Tim Boehme pull out, and a celebrity team of German racing driver Timo Schneider and his coach, Martin Kiechle.

The Bulls support crew consist of a chef, two mechanics, two physiotherapists and a manager, who is glue that holds them all together. “We have a great vibe as a team but we also have a good time with the other crews – and that’s what makes the Epic extra epic. The teams have a great rivalry on the course but off the course there’s great friendship.”

Durand says that when the riders cross the line he sees if they had any falls and if there are any serious issues with their bodies – then he swings into “recovery mode”. “We make sure they are hydrated and have a recovery shake within 20 minutes. We escort them to where they need to be – especially Karl. He’s such a social guy, wanting to chat with everyone that it could take him three hours to walk 500 metres. Then there’s a massage, strapping, ice baths – their systems are running fast and hot and we need to cool them down.”

Durand also monitor the riders’ general health, making sure they eat the right food and don’t shake too many hands. (“We prefer fist bumps – that’s much more hygienic.”) He says everything in a stage race is accumulative – and if something goes wrong the pressure mounts. “Our job is to process the stress; to decide what the priority is and manage that. We’re up at 4.30am and get to bed after 11pm.”

The support crew members have to manage their own exhaustion to make sure the riders are 100%. “We juggle a lot and fortunately between the six of us we have a lot of hands to keep all the balls in the air,” he says. “Our job is to shorten the riders’ days; to get them to recover quickly.”

According to Durand, excellent support staff time management could help the riders improve their race times by 2%, which could translate into a 20-minute advantage – which could be the difference between being on the podium and being an also-ran.

According to the Bulls’ website, Durand enriches the team with his skill as a physical therapist and also with his South-African mentality and special humour. “He has a solution ready for every situation.”