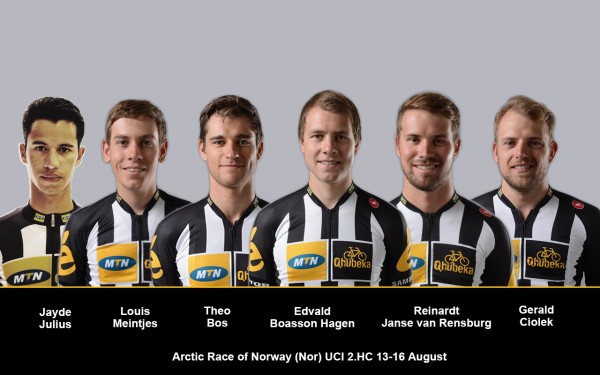 The UCI 2.HC event is comprised of just 4 stages, the first 2 looking to suit the fast riders while the final 2 stages probably more suited to a puncheur. That being said, with only 6 rider teams and 4 stages from which to decide the GC winner, we expect a very attacking and exciting racing each day.

MTN-Qhubeka p/b Samsung will send a highly motivated team to one of the most scenic races in the world, led by Edvald Boasson Hagen. Edvald comes fresh off a stage win at last week’s Tour of Denmark. Gerald Ciolek and Theo Bos who both played significant roles in Edvald’s Danish triumph will also start on Thursday.

The final 3 spots on the Arctic Race roster are filled by 3 South African riders. After both completing their debut Tour de France’s this year, Louis Meintjes and Reinardt Janse van Rensburg return to action as well. The final rider will be our trainee, Jayde Julius, he gets his first start in our African teams stripes.

Louis Meintjes – Rider
I am happy to be back racing after the Tour de France. I had a good break after the Tour with my parents visiting me in Italy but now I am looking forward to the rest of my season, starting here at the Arctic Race.

Jayde Julius – Rider
I am really looking forward to my first race with the guys. I know it will be completely different to racing on the amateur level but thank goodness I have had some experience racing pro races already as an u23. It is going to be a great experience which I can’t wait for.