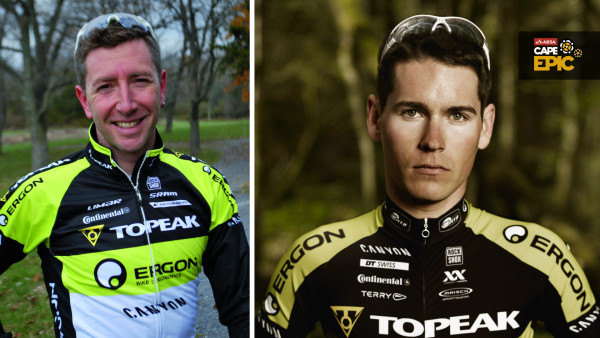 Germany’s Robert Mennen seems destined to have an interesting relationship with the Absa Cape Epic.  In 2013 he was forced out of the race when he hit what he described as “a peeg” as he descended on singletrack during Stage 1 near Citrusdal.  The pig, it turned out, was a duiker (small antelope) and in the ensuing tumble Mennen broke his collarbone.  In 2014 his Topeak Ergon team asked him to ride with Czech Kristian Hynek at the last minute after the latter’s scheduled partner – Alban Lakata – snapped his achilles tendon in a skiing accident.

Mennen and Hynek went on to win the 2014 event through a calm and calculated approach in a race of high drama.

This year Hynek is back with Austrian Lakata, a former Marathon World Champion and formidable competitor, and Mennen will be riding with American Jeremiah Bishop as Topeak Ergon’s  second team.  This might seem a bit unfair on the 29-year-old German, but he has committed himself to the support role: “Unfortunately the team doesn’t want me to defend my title and I’m disappointed that they haven’t got complete confidence in me’” he said. “But I accept their choice and will give my best to help them.”

His laid back demeanour may though prove to be a trump card if the Hynek/Lakata pairing needs assistance along the route: “My strengths are that I stay calm in stressful situations and am consistent through the whole week,” said Mennen.  He will also know that an entire Absa Cape Epic can turn on a split-second incident and that a support team one day can turn into a podium contender the next.  In 2014, for example, the Bulls support team of Tim Boehme and Simon Stiebjahn finished third overall after Karl Platt, riding with Urs Huber, had to pull out after being injured in a crash.

Bishop has a formidable record in endurance racing in the United States and boasts a Pan American Games gold medal in the cross country discipline.  He competed in the 2008 Absa Cape Epic – the longest ever at 966km – and finished in 11th place overall with partner Chris Eatough, also American. He is a relatively new recruit to the Topeak Ergon squad and will ride in a competitive event with Mennen for the first time from February 22 at the six-day Andalucia Bike Race in Spain.   “I have not been training with Robert but we have communicated some and are both very focused athletes.  We are all on Strava so it’s easy to push each other, and we will have an entire 10 days together at Andalucia,” said Bishop. “I am currently training in North Carolina and had a camp in Arizona last month, so form is strong and will be only getting better from here.”

Mennen has the experience though that suggests they will ride well together: “In the Epic you stay together for the whole week. It is really important to get along well with each other … you should never ride against your partner,” said the German.

The American is clearly looking forward to the challenge of the world’s premier mountain bike stage race: “The Cape Epic is special: everyone has heard of it and it carries legendary status.  In the USA the endurance racing scene is insular, so I hope people get excited and follow the action.”

Mennen said they would be riding the Canyon Lux CF 29er this year, the same bike that bore him to victory in 2014. “It’s an excellent bike for the Cape Epic because it is light, durable and, most importantly, the suspension works really well.  It doesn’t bob and provides a lot of comfort so we save a lot of energy for the end,” said Mennen.  “Most importantly, it’s a bombproof machine … the rest is up to us,” said Bishop.

This year’s race takes place from 15 to 22 March and will once again take 1 200 riders through some of the Western Cape’s most unspoilt territory.  The race begins with a prologue on Table Mountain, starting from the University of Cape Town, and finishes eight days later at Meerendal Wine Estate in Durbanville.

Meerendal will host the finish of the race and the Grand Finale celebrations for the first time. The Grand Finale boasts live entertainment, a farmer’s market, great food and wine and unmatched scenery.  Vantage points will be accessible to the general public.  Entrance is free.