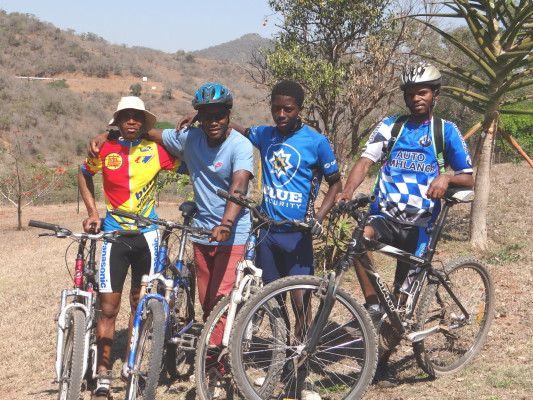 Three of the four members of the Mfula Store Team for the 2015 BSi Steel dusi2c line up to take on the two-day challenge (From left): Lindelani Ngcobo (not riding in 2015), Nkululeko Pewa, Msawenkosi Cili, Mbongeni Mzobe. – Gill Graaf/
Gameplan Media

Pietermaritzburg – The iconic Valley of a Thousand Hills is home to a number of aspiring mountain bikers, the famous Mfula Store as well as the growing BSi Steel dusi2c and the three have come together to help two pairs of local mountain bike enthusiasts compete in the 2015 edition of the two-day mountain biking challenge from Pietermaritzburg to Durban that takes place this weekend.

Taking on an event like the dusi2c can be quite a daunting task for some however, with Mfula Store owner John Graaf’s support and guidance, Nkululeko Pewa, Msawenkosi Cili, Mbongeni Mzobe and Khangelani Ngcobo are all looking forward to the task.

“The guys are local, development riders that we regularly assist with bikes, kit and the like,” Graaf said. “We have also received a lot of help from others in the cycling community who have donated bike spares and kit.

“It is something special for these four riders to ride in the Valley and they are looking forward to the dusi2c this weekend, especially as these trails go through the area they grew up in.”

With little more than a passion for riding, the youngsters started tackling the trails that flow through the Valley and eventually approached Graaf at the Mfula Store to see if he could help them pursue their mountain biking interests.

“Nkululeko (Pewa) is employed by us at the Mfula Store to help out in the gardens on Saturday’s and a couple of them approached us about helping them get into riding.

“It was a case of just trying to find bits and pieces that would go together to help them get started.

“We appealed to others to help us and friends came on board with more kit and gear to get them up and running properly.

“The majority of these guys are unemployed which makes it more difficult for them to maintain their bikes so we help them out as much as we can in that regard and it is always great seeing how appreciative they are when they receive their kit,” Graaf mentioned.

Despite their humble beginnings, the quartet have already added a few prize scalps to their list of successfully completed races and are relishing the opportunity to tackle the trails of the BSi Steel dusi2c this weekend.

“Considering they live and ride in the Valley, the guys are mountain bikers.

“They have however also ridden in the Amashova as well as the Tour Durban so racing is not foreign to them, although only Nkululeko has ridden the dusi2c before out of the group.

“They have been riding for a while so after last year’s race we approached Glen Haw again about some entries into the dusi2c this year and he was happy to help us out, which we are really excited about and extremely grateful for.

Sadly, Ngcobo will however not be taking part in the 2015 race due to work commitments.

The four Mfula Store riders have been seen preparing for the race this weekend over the past few weeks and without the benefit of the GPS navigation that the majority of the race’s field will have, local knowledge will be paramount in helping the four get to Blue Lagoon.

“We saw the guys out riding the trails again over the weekend, trying to get to know the route as much as possible before the race starts.

“They won’t have any GPS navigation equipment on their bikes this weekend, which could prove to be a bit challenging.

“We are quite sure that they will hop in behind the other riders though and even show others the way through certain sections,” Graaf concluded.