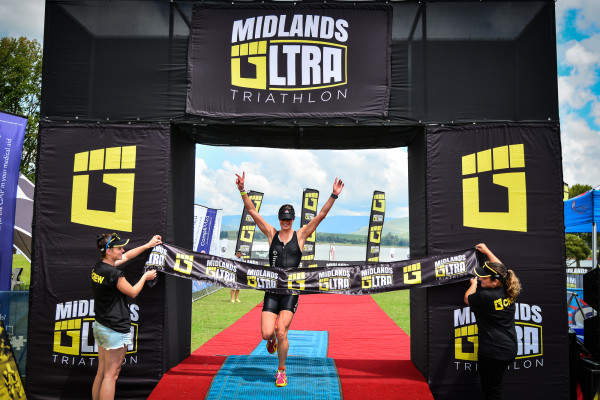 Any chance at racing a half ironman distance triathlon should be embraced. In SA they are few and far between and it’s not often that a well organised race with a long standing proven history comes your way, and to have it in the area where you live is even a bigger privilege. All this being said, obviously I was always going to race Midlands Ultra, no matter the time of year as its actually something we should embrace and race at every opportunity. I also took the opportunity to introduce “triathlon” to my good mate Andre (one year ago at Midlands) and his daughter (first ever race this Midlands, sprint). Needless to say, they both loved it and since the introduction to the sport Andre has done 6 triathlons and his daughter says she is hooked and will do this again and all this thanks to people like BActive who organizes races, not only for the racing snakes and uber competitive (like myself – not the racing snake part, but the competitive part), but races that is family friendly and welcomes all the newbies! 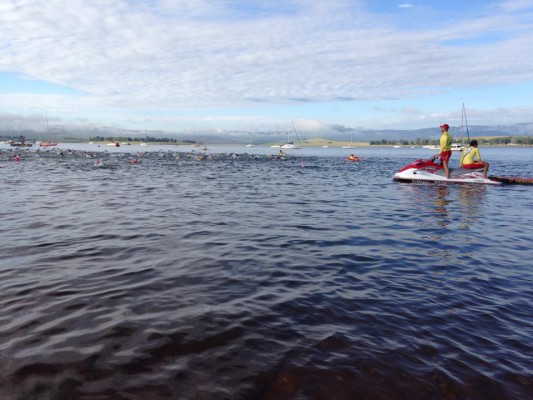 Swim start at the Midlands Ultra.

As everyone knows, the crew from BActive had terrible luck at Midlands Ultra in November 2014 – The mist decided to pull over the area and did not subside for hours leading to the race being cancelled. This race attracts a lot of JHB guys and girls so it was very unfortunate for everyone that travelled and trained so hard, but I am sure it must have been even more devastating for the BActive crew, they still had to organize everything as if the race is going ahead and incur all the costs.

Luckily as race morning dawned the conditions for this round of Midlands Racing was awesome. Very slight breeze, dam water just cold enough for wetsuit swim (YES PLEASE) and nice and sunny for a great tri suit tan.

First off were the sprint triathletes. The sprint tri starts of 20minutes ahead of the Ultra. This allows most athletes to complete the 600m swim and get out and about on the bike course before the ultra triathletes hit the course. Arranging things this way clears the way on the roads and with the majority of the entrants (about 550 of the 800) doing the sprint triathlon, starting them early ensures that they leave the roads before it gets to busy and is great for safety. Unfortunately at the Midlands race, there is no road closure out on the bike course, but excellent marshalling and visible policing/metro police helps keeping everyone safe on the road. The rest of the triathlon – swim and run, is all within the confines of the damn and super safe with no traffic and great areas for spectators to watch the racing. 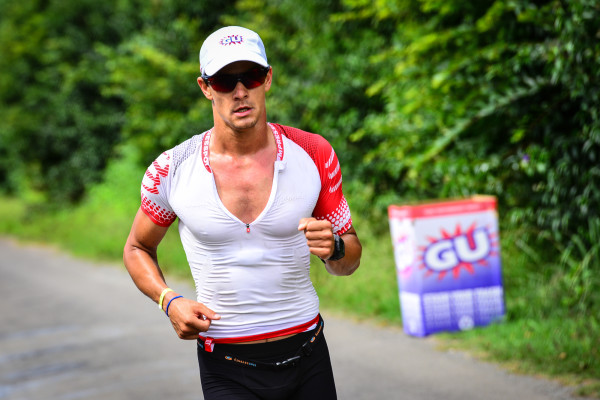 Now, to get to the race….. the actual reason why I was there…. To race hard and embrace the fact that I will be out on the course with the long distance in-form athletes of our sport, Gerhard de Bruin, Dean Hopft, Brad Venter, The legend himself – coach Van Gelder, Mark Sack to name just a few and to test myself against these guys. Its always nice to race the best as it brings out the best in you and gives you the opportunity to see how far you got in training.

I once listened to an interview with Graeme Smith, ex SA Cricket Captain and opening batsmen, where he was asked about nerves and facing the first ball of the match and his reply was that no matter how many times you open the batting, how great your current form is or how complacent you become, the first ball of a match/first over is daunting and you will always be nervous. I guess that describes a swim start for most people at any triathlon. No matter how great your swimming form, the start of a triathlon is nervous. No matter the distance – sprint tri or an ironman, the start of the swim is like a 50m race in the Olympics – everyone wants to get to the 1st buoy 1st – no matter whether the buoy is 1km away or 100m’s, you just know its going to be havoc. Swimming is one of the 3 disciplines I enjoy the most in training and always want to prove at every race that I am improving, which in turn makes me more nervous at every swim start, but ok such is life!

07:20 the gun was fired and the racing started. Fairly confident in my ability I try and go out the blocks quite hard and settling into some kind of rhythm fairly quickly. My goal was to get out of the water in the lead pack. A new introduction to triathlon, a youngster called Mark, who lives in Durban and has a swimming background, was always going to break away and he did (he swam 23mins 1.9km – RESPECT). The lead group, luckily including me, albeit hanging on the back like there is no tomorrow excited the water in the late 25mins early 26mins. I dropped my goggles at the exit (rookie mistake – don’t remove your goggles of your head and try and loosen your wetsuit, it doesn’t work, rather drop the goggles around your neck or leave it on top of your head, just remove it from your eyes) and had to turn back to fetch it and lost about 15seconds, which in T1 feels like an hour as everyone scrambles to get out on the bike and in a good position. This “gap” forced me to rush out and about on the course and probably be a bit reckless and I hit a pothole/piece of glass or whatever and punctured 4km into the bike in hot pursuit of the lead bunch. I had a massive cut in the sidewall of my tire and could not repair it, Game over. They say you make your own luck and I don’t consider myself unlucky, I guess I should be more careful and not rush so much, that would probably helped in not getting punctured and enjoy in the racing.

The cycling leg of the race was always going to be very hard and exciting with the UBER bikers like Gerhard de Bruin, Brad Venter and Cape Town flyer Dean Hopft. The cycling leg was 3 laps of 30km and with my punctured wheel and DNF I decided to run 1 lap of the cycling course as punishment (and for some training) and watch the cycling unfold in real-time. It was awesome to run past these guys and shout time gaps and see them putting everything out there on the tarmac. 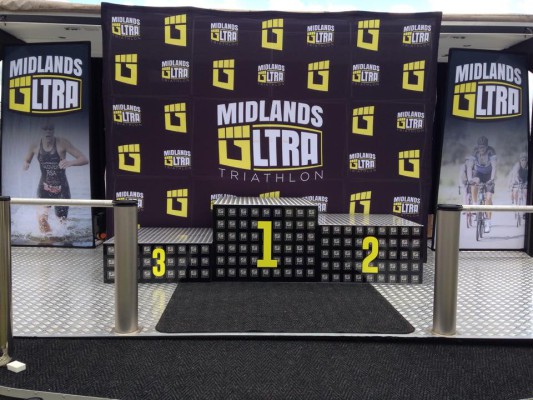 The podium all athletes strives to get their photos taken on, Midlands Ultra Triathlon.

Gerhard and Brad stayed away on the bike and formed a nice gap with a hard charging Dean Hopft and Mark Sack in hot pursuit and with racing this exciting who can go home early so I stuck around to watch the run leg. Once again it was great to see the action unfold on the side line and for once not being part of the race and eventually after 4hours + of battling, Gerhard won by 1 second over mark sack, with 3rd Dean Hopft beating Gavin Mofsowitz by 10seconds.

This was exciting stuff even from the sideline, so I am bummed for not being part of the action, but it was like watching a movie which in its own way was great.

The next event being organized by the BActive Crew is the Sun City Ultra on 10 May. This is sure to be a great race and I have already entered myself, my wife and taking another 3 people that is racing along for the action.

Till the next race! Happy training everyone.