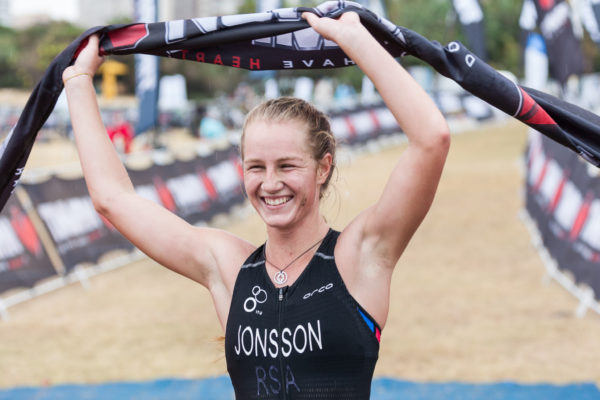 Round 3 of the Tinman Tri-series took place at the Suncoast Sundeck on Sunday, 24 July. From the 4 different races offered, junior triathlon superstar, Mikaela Jonsson, competed in the Ultra Tri Challenge – the Olympic Distance Triathlon – a 1km swim, a 30km cycle and a 10km run.

Jonnson won women overall and her age category, but as in all triathlons, the transition time taken between legs can mean the difference between winning and losing, as in this race. Jonnson’s race-time against Featherby was slower overall by 8 seconds, but 1m03s faster than Featherby in transition time.

Says Jonsson of her experience: “I’m so happy to have taken the win overall in my first-ever Olympic Distance Tri at the Tinman Triathlon in Durban. I had such a fantastic race. Thanks to some incredibly strong ladies for pushing me all the way, especially on the bike course. Finally feeling like myself again, after only being back at training for 3 weeks after battling with illness for over a month, and my first swim race after doing shoulder rehab for more than 2 months. I’m so grateful to everyone who has helped me with such patience and wisdom over the last few months. Onwards and upwards.”