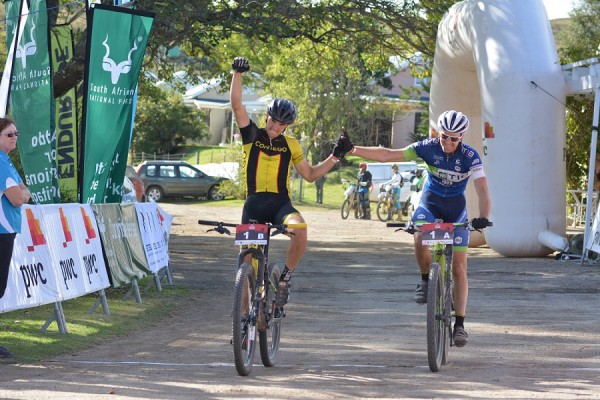 Having lost out on a possible stage win after veering off course on the opening day provided the spark for Andrew Hill and Adriaan Louw to assert their authority on stage two of the PwC Great Zuurberg Trek outside Port Elizabeth on Saturday.

The TIB Insurance-Contego outfit raced to a convincing victory and the overall lead on the 78km queen stage that started in wet conditions and took in portions of the Karoo and Addo Elephant National Park.

Their time of 3:18:21 was more than 14 minutes faster than that of the Kargo Pro team of Marco Joubert and Jurgens Uys, who finished in 3:32:32. Team Cycle Lab’s Andrew Mclean and former Springbok rugby star Joel Stransky took third in 3:41:29.

Imbuko-Freewheel Cycology’s overnight leaders, Chris Wolhuter from Cape Town and Dylan Rebello from Knysna, showed great determination to complete the stage after serious mechanical problems forced them to run much of the last 15km.

In the women’s category PE’s Anriette Schoeman and Hoedspruit’s Samantha Sanders of Africa Silks-Valencia continued to dominate after winning the stage in 4:17:28 (7:42:08).

Neill Ungerer and Yolande de Villiers of Head over Hills also extended their lead in the mixed section when they crossed the line at the head of affairs in 3:49:34 (6:54:24).

The 34-year-old Hill said they were on a mission to prove a point after the previous day’s mishap.

“We definitely wanted to prove where we felt we needed to be,” said the Durbanite after a satisfying day at the office.

“We rode not with anger but we put good force into the pedals and made it work for us.

“That was our plan from the beginning because it didn’t sit well with me how we lost that time yesterday.”

Even though Hill had a tyre problem early on, he and his Paarl team-mate regrouped to ride themselves back into contention before going on to build a dominant position by the end of the stage.

“For the first 6km we dropped down a very steep section and I had a tyre at the back that started to go down, so we lost about a minute fixing it.

“We said let’s chase that time deficit but let’s not do it in the next 5km. So we regrouped and just put our heads down.

“We went past the second team (Joubert and Uys) and about five to 10 minutes later caught up with Chris and Dylan at the front.

“They were riding a good pace but we caught them on a big climb, went past and accelerated a bit. We managed to get away, but it was still early days.”

Having established their position at the front, Hill and Louw were determined not to back down.

“Adriaan said we just have to make it work and he put his head down while I just held on for the rest of that section.

“We did get to a point with a big climb still to do when we looked at each other and asked ourselves whether we did not push too hard.

“But then we got a time split and were ahead by about five to six minutes, which was great, so we kept going at a really good pace until the finish.”

With a comfortable lead going into the final stage, Hill said they would do everything to avoid any risks.

“Tomorrow we are definitely not going to risk it. We need to make sure we have everything organised even if going for the GC means sacrificing the chance of a stage win.