Mixed fortunes and emotions on day 4 of joBerg2c 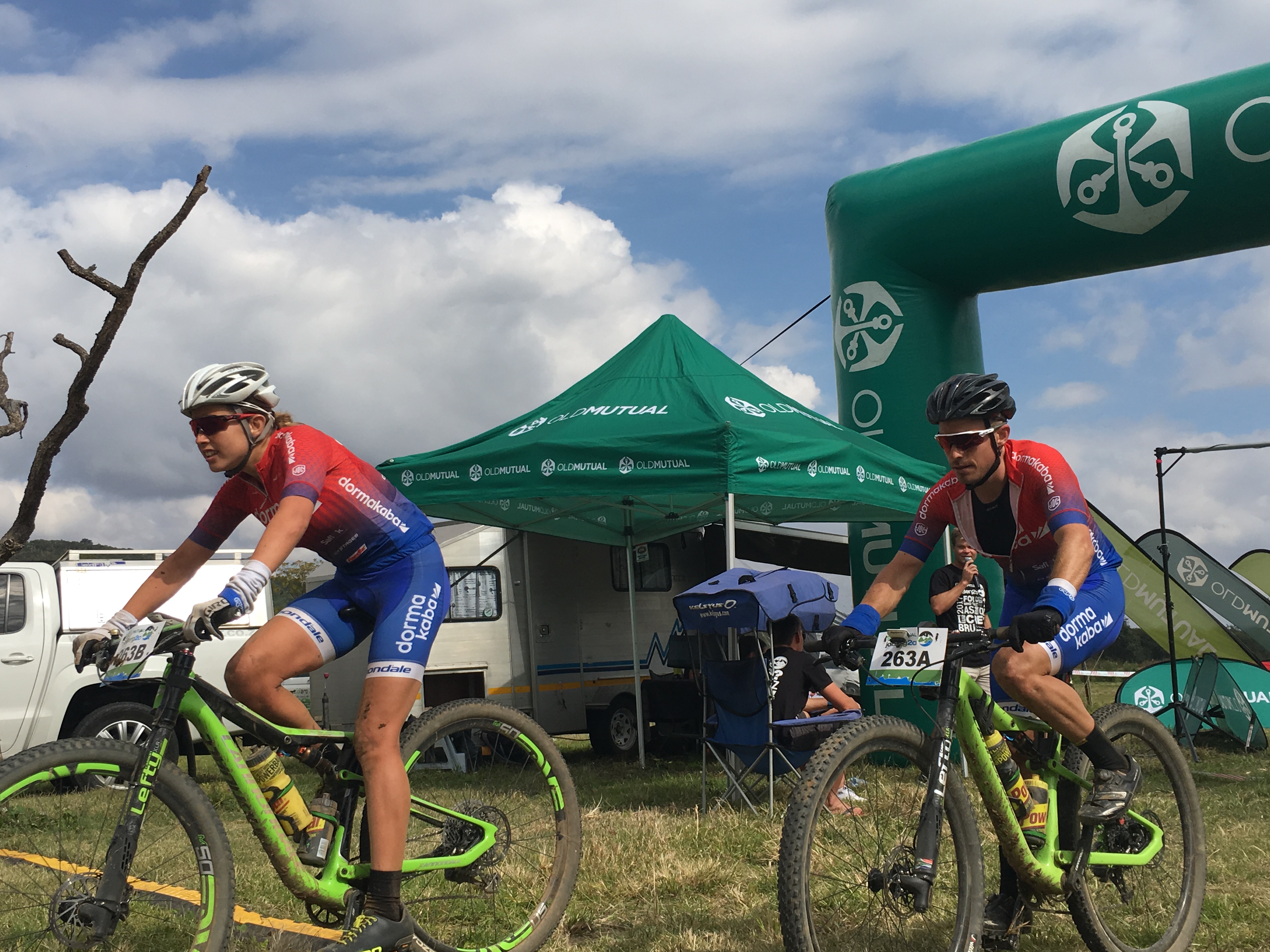 The fourth day of the 900km Old Mutual joBerg2c produced an exciting sprint finish as the leading men’s teams charged towards the Em’seni finish line near Winterton in KwaZulu-Natal. In the end, it was overall event leaders Nico Bell and Gawie Combrinck (NAD Pro MTB) who won the day ahead of Philip Buys and Matthys Beukes (PYGA Euro Steel). The finishing times were 2:50:05 and 2:50:06 respectively.

Day 4 of the joBerg2c provided some spectacular scenery and racing. This stage is an African evolution, with riders leaving Sterkfontein Dam in the Free State and making their way into KwaZulu-Natal for the first time in the race. Over the course of the 93km ride, farm lands turned to bushveld, while the gentle hills of the first three days have matured into mountains. In the riding to come, the climbing will have the final say.

For the racing elites, Matthys Beukes enjoyed the exciting dash where PYGA Euro Steel and NAD Pro MTB finished amongst each other, NAD Pro taking the win by virtue of their riders crossing the line in first and third.

Beukes explained the close end, “The end could possibly have been different, because Phil had a bit of a crash on the last downhill which gave Nico and Gawie time to catch up to us again. It was also difficult to get past them on those fast sections towards the finish.”

Buys was lucky to escape injury, as was his bike.

“I crashed in the last section. I was riding in the front and just pushed it around the corner just before a bridge. I made the corner but as I got on the bridge my rear wheel just slipped out. I fell off with about a metre to go on the bridge, and I landed up falling off it and had to grab a tree and my bike fell further down. It took me some time to get it back up.”

With four days of racing to come (day 9 is another neutral stage), Beukes said it’s now time to unleash the beast, “The routes are getting more technical, but for us it’s still not technical enough. It’s time to start taking every opportunity and chase hard. We’re waiting to get to the bigger climbs…”

In the Lanham-Love Mixed category, it was another great day for Candice and Darren Lill (dormakaba), who crossed the line first in a time of 3:08:29. It was their third straight state win. Grant Usher and Amy Beth McDougall (Lanham-Love Valencia) arrived shortly after dormakaba in a time of 3:13:01.

The Lills have shown no signs of weakness and it appears their fondness of the joBerg2c is powering them through.

“Another positive ride, but again it’s never easy when you’re racing. We were fortunate to take advantage of Candice’s strong start this morning,” said Darren Lill.

“Racing was close between us and Lanham-Love Valencia until we managed to get a lead on them. We didn’t break away, I think they just fell back a little,” said Darren.

Candice Lill, said the day 4 route was incredible and came as a welcomed change. “It’s changed this year and is definitely a little shorter – which doesn’t necessarily make it easier. They have kept some of the sneaky climbs towards the end which are great, but tricky too.”

A reflective Grant Usher explained the emotional ride today, “We were just thinking how lucky we are. It’s such a privilege for anyone riding with their life partner like Amy and I – just to share an experience like this. Especially on a day like this, heading into bushveld; it’s really African, riding past aloes, acacia trees and game.

“It’s great for other riders, particularly the foreigners as they must surely feel like they’re in Africa now. It’s been one of my favourite days on the bike ever,” said Usher.

The couple have fond memories of success in this part of KwaZulu-Natal and spent much of their ride remembering their special times in the region.

“It’s hugely special for Amy. Winterton is where she won the Single Speed World Champs in 2012 and she’s got the tattoo to prove it. So this day is always very special for Amy but also for us, and all the single speeders,” said Usher.

Usher added that both he and Amy turned their thoughts to fallen friend and fellow rider, Burry Stander, who won the men’s Single Speed World Champs in 2012. “Today we really tried to remember Burry. He is, for us, the evergreen single speed champion, and he will forever be undefeated, so this is a very special place for him as well.”

Day 5 of the Old Mutual joBerg2c is the big one, 123km journey from Em’seni in Winterton to Clifton school in Nottingham Road. The day also features the most climbing of any of the race days, with the last 30km featuring the bulk of the hills. Riders will enjoy the sight of the day 5 finish line.