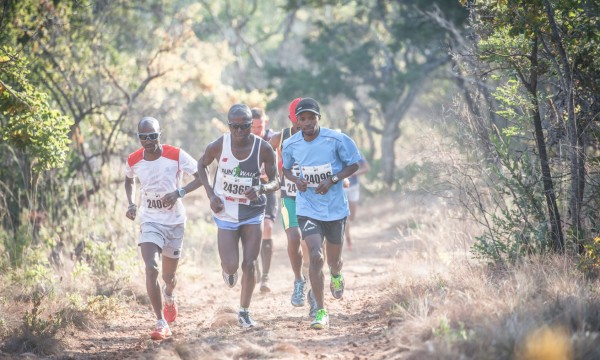 Lucky Miya claimed victory in the men’s 24km FNB Platinum Trail Run at the ATKV Buffelspoort on Sunday, 24 May 2015 in an impressive time of 01 hours 29 minutes 16 seconds. Seen here (from left to right): Thabang Madiba, Ngwendu Mziwnke and Lucky Miya in action on the day. PHOTO CREDIT: Volume Photography

In the men’s race, the second time round proved to be the charm for Lucky Miya who completed the 24km FNB Platinum Trail Run in an impressive time of 01 hours 29 minutes 16 seconds. In the women’s race Megan Mackenzie was fighting fit claiming victory on her first attempt in a well -deserved time of 01 hours 48 minutes 25 seconds.

According to Miya, the FNB Platinum Trail is perfect training for the world trail run championship. “The race was fast with Thabang Madiba and Edwin Sisipi offering tough competition. I had to run as hard as I could. After finishing 2nd in 2014, it felt awesome winning here today. I’d definitely recommend this event to all runners. It’s really well organised, while the route is not too technical”. Edwin Sesipi came in second, while Thabang Madiba finished third.

“Today’s race was fantastic,” said a very happy Mackenzie. “In 2014 I withdrew from the event due to injury. It felt like my world was coming to an end, but time goes on. One year later here I am reaching my goals. The route was fast, I just loved it. The FNB Platinum Trail Run is ideal for both elite runners as well as runners that just want to try out the trails. It’s well organised, you won’t find many trail run events like this”. Mpho Mabuza came in second, while Poppy Mlambo finished third.

Both Miya and Mackenzie will head to Switzerland in July where they will take part in the 2015 World Long Distance Trail Champs. Other members of the South African Team include: Johardt van Heerden, Thabang Madiba, Iain Don-Wuachope, Su Don-Wauchope and Karine Bezuidenhout.

“We are thrilled to see athletes from across the country participating in one of the North West Province’s most exciting running competitions. The route chosen for the FNB Platinum Trail Run makes it a unique race as it provides a perfect balance of beautiful scenery and challenging terrain. We congratulate all the athletes who took part in this year’s competition and hope to see them again next year,” says Michael Vacy-Lyle, FNB Business CEO.

FNB Business and FNB Private Wealth have made a joint commitment to sponsor the annual Platinum Trail Run.

FNB’s ongoing strategy is to support local and community events that show the potential to grow. This sponsorship affirms our dedication to providing an experience that is beyond expectation, through sporting disciplines that continue to grow in popularity as two of the key activities in the South African sporting calendar.

The Platinum Trail Run is aligned to our belief that adventure is the heart of innovation and this event is one of many platforms on which we seek to make a lasting connection with new and existing clients.

FNB Private Wealth. Before we invest your wealth, we invest our time.