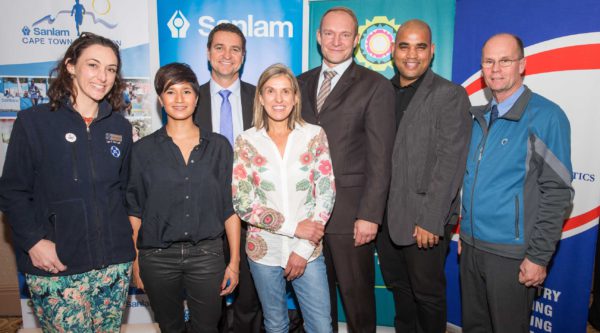 The 42km race has taken huge strides over the last two years, establishing its place as the only IAAF Silver Label marathon in Africa. The new course, starting on Beach Road, promises to add yet another dimension to the weekend running festival, assisting organisers in their aim to bridge the gap on globally renowned races around the world by becoming Africa’s iconic city marathon.

Race ambassador Elana Meyer believes the tweaks made to this year’s route will ensure that elite athletes can challenge for records, particularly with pace setters expected to push the field up front. They will also allow amateur participants to aim for personal bests in the sea-level race. The elite field will be announced 30 days before the race.

Meyer, who broke multiple roadrunning world records during her spectacular career, says, “The new course is flatter, which will make it faster, and the times should be quicker throughout the field. With another world-class line-up expected to compete this year, there will definitely be a good chance of seeing records broken on the day.”

Says Carl Roothman, Chief Executive of Sanlam Investments Retail Business: “We are proud to be back in our third year of partnership with the marathon, and are ready to pull out all the stops in going for the Gold Label status.  As Wealthsmiths™, we have a true understanding of what it takes to get the reward of discipline and dedication, and we have put forward an incentive for the marathon winner who breaks the current record on a standard course in South Africa.”

Meanwhile, the build-up to the Sanlam Cape Town Marathon weekend, which includes a 10km #PeaceRun, 12km and 22km PEACE Trail Runs, a 4.2km Peace Fun Run and the classic 42km Marathon, as well as a world-class pre-race Expo, will be focused on the key goal of Going for Gold. Using the promising bid, launched by the organisers to become Africa’s iconic city marathon, the race will host numerous activations and events in the next 60 days.

The run for change pledge includes a #RunGreen campaign, promotes peace through sport, raises money for multiple charities, and aims to develop South African athletics through youth programmes and academies. The event also drives participation and community involvement through the #ChallengeYourself and #ChallengeYourFriend campaigns, which urge people to take on the challenge of completing or watching the marathon with a friend, family member or partner.

Says Roothman, “This year, close to 1 000 Wealthsmiths™ runners will join our two celebrity runners, radio DJ Poppy Ntshongwana and Masterchef SA winner Kamini Pather, who have chosen the Sanlam Cape Town Marathon as their preferred marathon.  We urge everyone to challenge friends and family from across the country and the world, as well as colleagues and gold label runners from the rest of Africa, to help build Africa’s Major together.

“The #RunGreen campaign – through on route infrastructure, a carbon footprint off-set application initiative, and investments into the JSE Carbon Credit Project – allows each entrant to make a difference in South Africa.  We are able to help sustain the beauty of this iconic city marathon which has quickly become the must-run city marathon on the continent and in the rest of the world.”

As part of the drive to raise funds, a “Focus on Fundraising” workshop for charities and the non-governmental sector will be held immediately after the 60-day countdown media conference. The workshop will present findings from the London Marathon, after a recent trip made by Sanlam Cape Town Marathon representatives offered insight into how the local event could become a powerful supporter of grassroots organisations in need. A fundraising platform will be presented, along with insights gained from the Sanlam Foundation, the Vital Foundation, and a case study by a charity.

Other activities, which are expected to add to the race’s extensive reach across the country and the continent, by attracting interest throughout Africa, are:

“Aside from the massive participatory and spectator value the Sanlam Cape Town Marathon offers, the fundamental premise on which it’s based is to effect meaningful and lasting societal change in the hearts and minds of people both directly and indirectly linked to the event. It’s a quality that all world-class IAAF events espouse,” says Janet Welham, race director for Sanlam Cape Town Marathon.

The final build-up to the weekend festival will centre around the Expo, to be held at The Lookout at the Waterfront, which incorporates race registration. The Expo will be open between 10am and 7pm on Friday 16 September and between 9am and 5pm on Saturday 17 September.

You can enter online at www.sanlamcapetownmarathon.com

Africa is our home, this is our race.

It’s Cape Town, must run it!