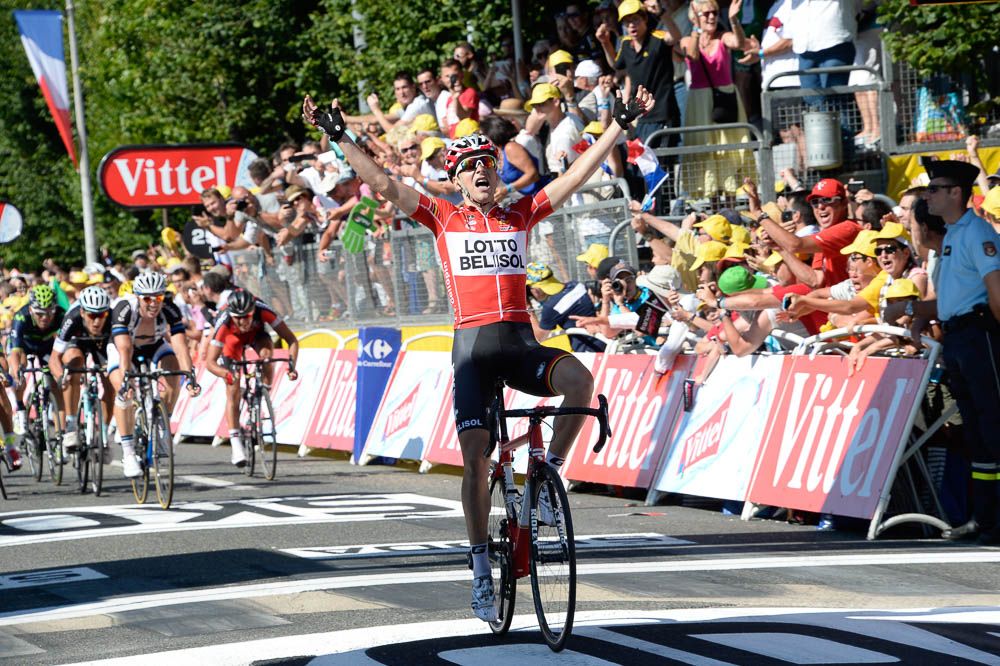 Tony Gallopin had his day of glory as he wore the yellow jersey on Bastille Day but he suffered a lot in the Vosges and didn’t enjoy the ride really but he made it up after the rest day as he claimed his first stage victory at the Tour de France in a brilliant manner. He attacked twice in the last five kilometers to deliver another thrilling finale in Oyonnax while Vincenzo Nibali retained the lead and Andrew Talansky experienced a completely different feeling with a sore back at the far back of the race.

Elmiger, Lemoine and Delaplace the lucky onesJérémy Roy (FDJ) was the first attacker after the flag off. Following many skirmishes and a notable one by green jersey wearer Peter Sagan who rode alone ahead of the bunch from km 13 to km 18, a breakaway finally took shape at the exact moment the feeding was allowed, at km 28, earlier than usual due to the hot and sunny weather conditions. Swiss champion Martin Elmiger (IAM) was the first rider to find the way to escape. He was rejoined four kilometers further by Cyril Lemoine (Cofidis) and Anthony Delaplace (Bretagne-Séché). Their advantage reached 6.45 at km 46 where two teams, Cannondale and Orica-GreenEdge, decided to initiate the chase.Talansky in troubleWith 80km to go, a challenger of the Tour de France went into trouble: Critérium du Dauphiné winner Andrew Talansky (Garmin-Sharp) lost contact with the peloton and couldn’t take the slipstream of the riders coming across to the peloton after answering the call of the nature. After twenty kilometers of suffering, the American stopped on the road side in front of the broom wagon but his directeur sportif Robert Hunter convinced him to get back on his bike.Gallopin attacks twiceIn the climbs located in the last fifty kilometers, Elmiger dropped his breakaway companions one by one and saw the return of Jan Bakelants (OPQS) and Nicolas Roche (Tinkoff-Saxo) with 37km remaining. One kilometer further, two more riders reinforced the front group: Cyril Gautier (Europcar) and Jesus Herrada (Movistar). The leading quintet only had 20 seconds lead with 25km to go. Roche went for a solo effort with 21km to go. He passed the last climb as a lone leader but got reeled five kilometers further in the downhill by the first part of the peloton led by Tony Martin for OPQS. Tony Gallopin (Lotto) was the next rider to attack but he got caught 4.5km away from the finishing line by three riders: Peter Sagan (Cannondale), Michael Rogers (Tinkoff) and Michal Kwiatkowski (OPQS). 2.5km before the line, the Frenchman attacked again and resisted to the return of the peloton reduced to 35 riders to claim in Oyonnax a valuable victory that puts him in the history of the Tour de France for the second time in four days after he wore the yellow jersey on Bastille Day. Vincenzo Nibali retained the overall lead.