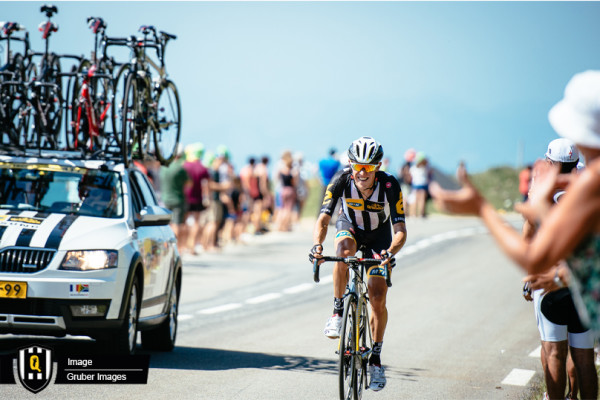 The 11th stage of the Tour de France had MTN-Qhubeka p/b Samsung fans on the edge of their seats as Serge Pauwels rode incredibly well to eventually finish in 4th place on the day. The stage victory went to Rafal Majka (Tinkoff-Saxo).

With most teams believing the break would survive today, there was a huge fight to get into the early move of the day. Edvald Boasson Hagen broke away after 5km of racing with 3 other riders and the quartet then held on to a 30 second lead for around 35km’s, riding at close on a 50km/h average. The peloton never gave up on the chase though and the 4 were eventually caught.

There was another flurry of attacks with Daniel Teklehaimanot and Jacques Janse van Rensburg both involved in the action but again, the peloton kept bringing the race back together. It was only after 75km’s had been completed that 7 riders eventually got away from the main field. Serge was joined by Majka, Thomas Voeckler (Europcar), Emanuel Buchmann (Bora Argon 18), Julien Simon (Cofidis), Steve Morabito and Arnaud Demare (FDJ). The leaders hit the first main obstacle of the day, the Col d’ Aspin where Dan Martin (Cannondale-Garmin) then also rode across to the lead group.

The peloton sat up and allowed the leaders to open up a lead of just over 7 minutes. When the riders reached the Col du Tormalet, Astana decided to up the tempo in the peloton and the reaction came straight away from the break. Majka attacked with 48km to go and Serge was the first to respond as the rest of the break fell behind. Serge would summit the Tormalet 1’50” behind Majka and would pull back 50″ on the descent.

Unfortunately Majka was just too strong on the day and he would solo to the victory. After Serge emptied the tank trying to bring back the Tinkoff rider, he would be caught and passed by Martin and Buchmann in the final 3km, crossing the line in a courageous 4th place.

Serge Pauwels – Rider
The goal was to have somebody in the breakaway. It was a really hard start and we first had Edvald there. I chose my moment and that was when the good breakaway went and a new race started. In the break Majka was the strongest. I tried to fight for the victory but there was one guy stronger. I am really happy with my result though.

Jens Zemke – Rider
The first hour of racing was really fast and we had Edvald in an attack of 4 riders. The peloton didn’t give them any real advantage, mostly 40″ until they brought them back. Then the next move was successful and we had Serge in the break. On the Col d’ Aspin we had a chaotic moment when we had to give Serge a new shoe, eventually we could solve the problem. On the Tormalet it was everybody for themselves. Serge would cross the famous Tormalet in 2nd. He was super-fast on the descent and was only a minute behind Majka. Then there was a 10km section with a strong headwind before the last climb at 3km to go where he was caught by Martin and Buchman. He could not hold the wheel anymore. It was a fantastic, absolutely fantastic ride by him to achieve this top result of 4th place in the Tour de France and we are really proud of him.