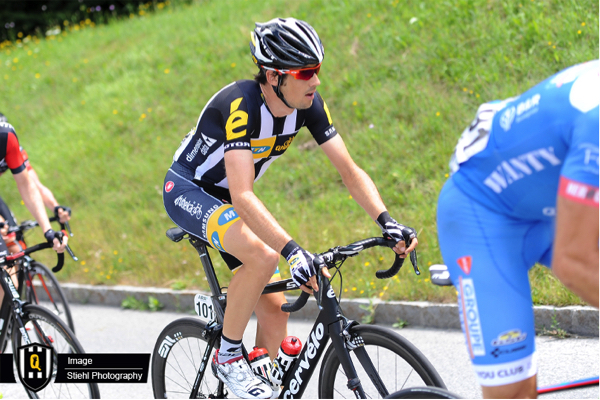 The GP Industria would see the Italian national team take the spoils for the 3rd time this week as Daniele Bennati sprinted to victory ahead of his 4 breakaway mates. Marco Marcato (Wanty Groupe Gobert) was 2nd and Davide Rebellin (CCC Sprandi) claimed 3rd place.

Team MTN-Qhubeka p/b Samsung were again protagonists of the race with Jaco Venter getting into the early break of the day with 4 others. Just as in the previous 3 Italian one day races this week though, the Italian national squad started chasing from early on and had reeled in Jaco’s group with still 80km to go. This was only after Jaco had collected the majority of points on offer for the King of the Mountains prize, which meant he would go on to win the classification.

A flurry of attacks initiated by the Vincenzo Nibali led Italian team saw the peloton split in pieces again. 5 riders got clear, Bennati, Marcato, Rebellin, Nibali and Wackerman. Behind the 5, a chase group of 14 riders formed and our Serge Pauwels and Johann van Zyl were both part of the pursuit. While the 5 never got more than a minute lead during the final 60km, Nibali got the leaders to cooperate 100% with each other and they would be able to hold there slim advantage to the finish.

The chase was absorbed back into the main field with around 3km to go, Serge being one of the final riders to be caught. The reduced peloton then sprinted it out for the minor places with the top 5 places already taken out by the break.

Serge Pauwels – Rider
Initially I tried to follow Nibali when he attacked but I came up 20 meters short at the top of the climb. On the next circuit lap we escaped and came quite close to Nibali’s group but we could not catch them. At least I am happy with my race as this was my 12th day of competition in the last 15 days.

Alex Sans Vega – Sport Director
The last race of this first block of Italian was different compared to the others. There were a few attacks at the start and the Italian team sat on the front controlling after 20km, letting 5 riders go with Jaco included. There were a lot of KOM’s on the route and Jaco sprinted for the first 6 which saw him win this classification. Nibali made the race hard from around 70km to go which saw Jaco’s group getting caught. Nibali got away again and Serge was part of the chase just behind but even thought the gap was as small as 20 seconds at one point they couldn’t catch them. The guys rode well again today, Adrien crashed quite heavily halfway through the race but fortunately nothing seems to be broken.