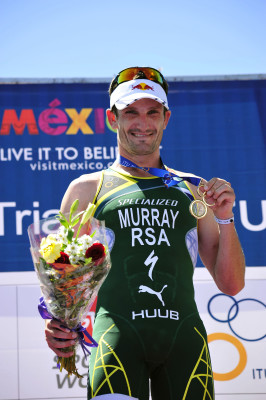 South African triathlete Richard Murray has ended his 2015 season with a victory when he won the 2015 Cozumel ITU World Cup in Mexico on Sunday.

Murray won the sprint race in 55 minutes and 3 seconds. It was Murray’s last official ITU race of the season and his penultimate of the season.

The victory was not only a first for Murray in the Mexican city, but also secured him his fourth consecutive ITU podium after taking home the bronze at the Rio Test Event, victory at WTS Edmonton and a third place at the WTS Grand Final in Chicago. Murray also won the 2015 New Plymouth ITU World Cup in New Zealand earlier in the year and he started the WTS with a third place in Abu Dhabi.

On Sunday Canadian Kyle Jones and Gabor Faldum from Hungary joined Murray on the winners’ podium. 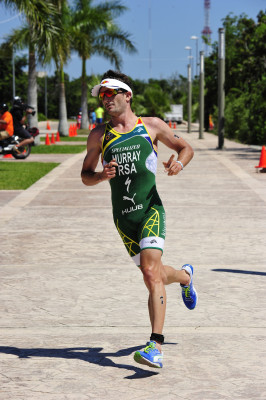 “The swim felt pretty good. I thought I was in a good position in the swim, until I got onto the bike and saw 50 bikes there and that is normally not a sign of a good swim,” said Murray.  “I was thinking on the run that I could finish the season off with a win if I don’t blow up. I felt pretty great throughout the race and managed to pull it together. I am happy with the race, I am very happy to race in Cozumel for the first time and get the win.”

Murray is now coming back to South Africa for a few weeks before he leaves to race the Island House Invitational Triathlon in the Bahamas from 6-8 November.