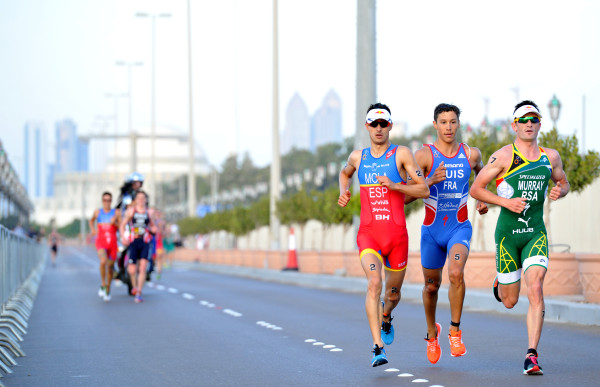 Richard Murray in action this past weekend in the WTS Abu Dhabi. Racing against Mario Mola and Luis Vincent. Credit: ITU/Janos Schmidt

Richard Murray started the 2015 World Triathlon Series in great fashion by not only earning a spot on the winner’s podium, but also seeing some of that much wanted improvement in his swimming discipline.

Murray finished the WTS Abu Dhabi sprint race in 52 minutes and 50 seconds. Mario Mola from Spain won in a time of 52.32 and Frenchman Vincent Luis was second in 52.45. Avoiding a sprint-finish, Mola took off with about a kilometre to go to earn himself a safe lead and victory. Luis dropped Murray mere meters from the line earning himself a silver medal (52:45), and Murray followed shortly after at in 52:50.

“It was amazing. I could not have asked for more in the first race of the year. My swimming is going in the right direction. Unfortunately, I had a bit of a fumble coming out of the water and had a bad first transition. I almost crashed during the cycling leg when somebody cut in front of me. The front wheel buckled, but I managed to keep going. That was my drama for the race. It was a good run and I could see Mario and the others put in some hard miles on the running. My focus had been more on the swimming.”

Murray is off to Auckland for another training camp with his coach Joel Filliol. The second WTS race is at the end of March in Auckland, New Zealand.