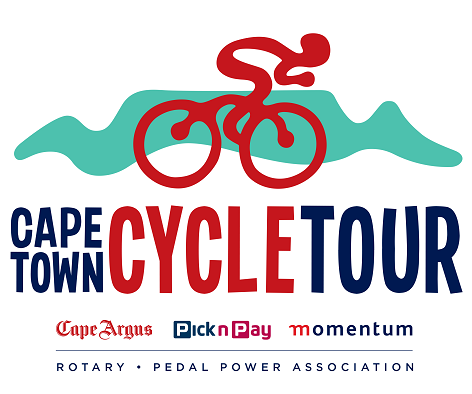 In recognition of the tour’s global status and international appeal, its organisers and owners – the Cape Town Cycle Tour Trust (CTCTT) – in association with the three co-naming rights sponsors, Cape Argus, Pick n Pay and Momentum, introduced the name change and logo in celebration of the event’s iconic status and increasing global appeal.

Speaking at the event, Steve Hayward, Chairman of the CTCTT, took guests through the history of the tour saying:  “The Cape Town Cycle Tour is Africa’s premier cycling event. It has grown from humble beginnings, attracting only a few hundred cyclists who participated in the first tour as a protest ride, to the worlds’ largest timed cycle race. The event has enjoyed a remarkable journey over the past 37 years, and the new name and logo revealed tonight is testament to our coming of age as we move into the next phase to becoming one of the worlds’ most desirable participation sporting events.”

From modest beginnings to iconic stature

Bill Mylrea and John Stegmann, two men who formed part of a group of people with a dream of a cycling South Africa, are credited with being the visionaries behind the first Cycle Tour.  The inaugural event took place in 1978 and inspired the idea for a longer ride around the peninsula.  Only 525 riders participated in the first race.  Today, 35,000 local and international cyclists are drawn to the Mother City on the second Sunday in March each year to tackle the spectacular 109km route.

The event has been affectionately known as “The Argus” since its inception.  Jermaine Craig, Editor of the Cape Argus newspaper which has sponsored the event since that first year, says: “When the Cape Argus was approached to use our name for the first ride, it spoke strongly to our paper’s civic activist roots.  In our paper this year we reported that in Cape Town alone 300km of cycling lanes had been completed or were nearing completion, so the cycling ‘activists’ can certainly say it’s been a case of mission accomplished.

“From the start we have supported the race in its different guises and evolutions.  We are proud to again pledge our support to the ‘Cape Town Cycle Tour’ and we remain passionate partners of this exciting event.”

Pick n Pay has been a key co-naming rights sponsor of the Cycle Tour for over two decades.  “Pick n Pay, along with the Cape Argus, has enjoyed a long-standing partnership with the Cycle Tour.  Together with the City of Cape Town and Momentum, we are now moving into a new partnership phase,” says Malcolm Mycroft, General Manager of Marketing at Pick n Pay.  “We have always been incredibly proud to be part of this iconic international event, which not only promotes a healthy lifestyle, but also raises funds for many local charities.”

Earlier this year, Momentum acknowledged the upward trajectory of the Cycle Tour when it joined Cape Argus and Pick n Pay as a co-naming rights sponsor.  Commenting on the new direction of the Cycle Tour, Danie van den Bergh, Head of Brand Momentum, says: “As the newest sponsor in the Cycle Tour family we could not be happier to be on board and part of the development of this iconic event.  We were fortunate that all partners shared the vision to renew and rejuvenate the race as it moves forward into a new and exciting phase.  The tour’s charitable component is important to us because we want to further fulfil our role as a good corporate citizen, and offer our clients a superior experience with every interaction with us.  We are proud to share the passion of Momentum’s involvement, the beauty of Cape Town and the bounty of a South African welcome, with everyone.”

The start of a brand new cycle

The new brand incorporates traditional aspects that have always been associated with the event: iconic Table Mountain – the universal symbol for Cape Town – and a cyclist pedalling the route which wraps around the peninsula.

“We wanted to uphold the event’s rich heritage, while aligning with other international tours.  The new Cape Town Cycle Tour name and logo is a logical next step to achieving our ambitious goal of positioning the tour globally as an iconic bucket list event and use our growing international appeal to attract a wider audience to not only participate, but also spend time in Cape Town and South Africa.” explains David Bellairs, Marketing, Sponsorship and Communications Director of the CTCTT.

The event’s iconic link to Cape Town was highlighted by Executive Mayor, Patricia De Lille, who shared her enthusiasm on the impact this will have on the future vision of the City.  “We have a vision for the City of Cape Town to become the events capital of Africa. For years, people from across the country and the world have cycled through the city and seen everything that we have to offer. We are honoured that the Cycle Tour has now been named after the City and look forward to welcoming the participants for the Cape Town Cycle Tour.”

Riding for a cause

Over the years, the Cycle Tour has generated millions of Rands for cycling development and the charitable projects supported by its two main beneficiaries, the Pedal Power Association and the Rotary Club of Claremont, who collectively make up the Cape Town Cycle Tour Trust.  In 2012, charity entries were introduced for the first time with some 5,000 entries offered to various charity groups.  “We want participants to use the event as a platform to give back to their communities, and the interest we receive each year from charities wishing to use the event as an opportunity to fundraise for worthy causes is overwhelmingly positive,” says Bellairs.

The Cape Town Cycle Tour will take place on Sunday, 8 March 2015 and entries open on Friday, 26 September 2014 at 2pm.  The event’s name and logo change will not impact on the format of the 2015 route, and cyclists and spectators can continue to enjoy the world-class experience they have come to love over the past 37 years.