Namibian Till Drobisch shows his Class 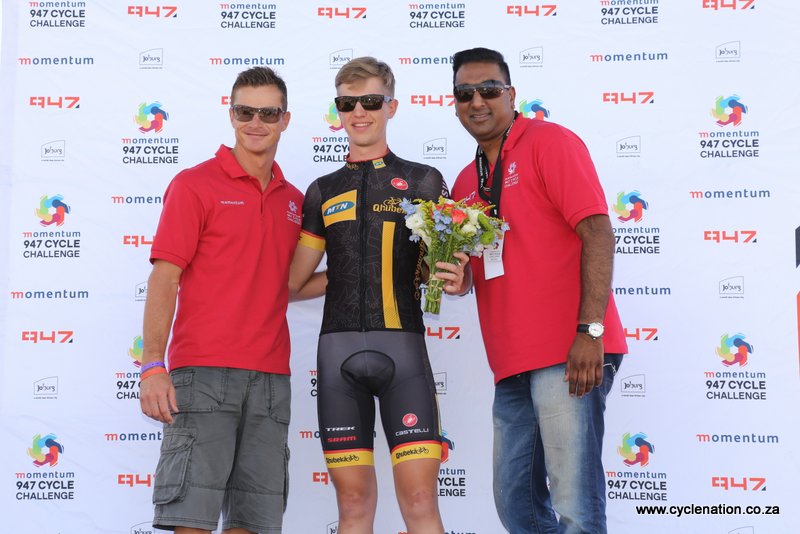 The World Cycling Centre Africa MTN Qhubeka Feeder Team’s Till Drobisch of Namibia took an unexpected win on Sunday in the Momentum 947 Cycle Challenge.  The Namibian had broken his collarbone in late August.

The race took an unexpected turn though, when an early break away group of 14 riders went clear of the peloton. With all the major teams well represented, the group seemed to work well together, gaining almost 3 minutes. Team Abantu, Westvaal BMC and the MTN Qhubeka Feeder Team all had three riders in the break with Team Bonitas with two and Team Europcar with one rider.

Even when the cooperation within the group started to wane, the peloton seemed to be reluctant to chase hard, perhaps keeping challenging finale to this year’s Momentum 947 in the back of their minds.

An amazing effort from the MTN Qhubeka Feeder Team’s Oliver Stapleton-Cotton also helped to hold off the peloton in the finale. Drobisch’s break away companions launched a flurry of attacks starting from JC Nel of Westvaal BMC. Drobisch’s team mate, Metkel Eyob, was able to hold off the onslaught which allowed Drobisch to launch his race winning attack in the final few hundred meters.