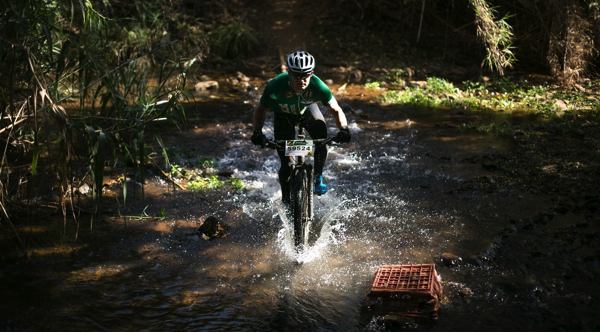 The Ashburton Investments National MTB Series visits the North West province for Round 4 this weekend. The venue is Van Gaalen, widely considered the best allround mountain biking test when it comes to marathon distance racing.

Nestled at the foot of the Magaliesberg mountain range, and close to Hartebeespoort Dam, Van Gaalen was the venue of the 2015 South African marathon national championships. It has the right blend of distance, gradient, terrain variety and proximity to both Pretoria and Johannesburg to make it a popular race venue. The riverside singletrack used for the final kilometers is rated by TREAD magazine as “one of the best pieces of singletrack in South Africa”.

Last year Combrinck won his national title at Van Gaalen, followed home closely by Bell, who says he is fully recovered after being hit by a car while training on his road bike recently.

“I like the rocks and gradient at Van Gaalen. At the SA Champs last year though, the racing was quite negative in the first half. Hopefully this year with no national title at stake, it will a fierce contest from early on,” said Nico Bell.

Knox won the recent Nissan TrailSeeker marathon but says that he’s not at his best form, but looking forward to the Van Gaalen race.

“I’ve never won at Van Gaalen. It’s a very balanced race route with properly challenging sections. It’s not possible to be in peak form from January to November so you have to choose the races that are important to you. This isn’t one of my primary events, but in order to win the series, every round requires a solid ride. I’ll give it my best shot,” said Knox, the defending Ashburton Investments National MTB Series champion

“I have mixed feelings about Van Gaalen,” said Stellenbosch-based Woolcock. In winter it’s a cold, tough and dusty route, but it can also suit me. I did some of my first mountain bike races there so it’s quite special to me too.

“I took a short break after Sani2c, but I’ve started to build my training up again so should be in decent condition for Saturday’s race,” added Woolcock.

Women’s winner at Van Gaalen last year, Robyn de Groot, will be unable to defend her title on Saturday. The Ascendis Health rider is still recovering from a shoulder injury sustained in a crash last month. Her absence will make for a very open women’s race.

Likely favourite is Samantha Sanders (Valencia), who is fresh off winning the women’s titles at the Zuurberg Trek and joBerg2c stage races. Her main competition is sure to come from Theresa Ralph (Galileo Risk), Amy Beth McDougall (Valencia) and Vanessa Bell (Bells Cycling).

In addition to the Elite men and women’s races, Youth, Junior, Sub-veteran, Veteran, Master and Grandmaster age-groupers will by vying for podium places and valuable series points.