Nel aims to be back to his best for Jock Tour 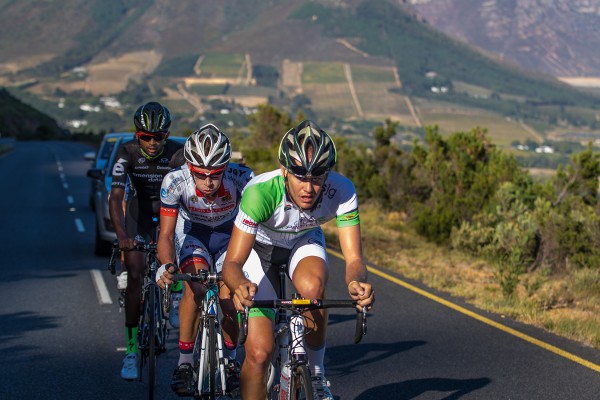 Top tour rider JC Nel (front) is keen to prove himself in the three-day Bestmed Jock Tour in Nelspruit, Mpumalanga, from July 15 to 17 Photo: Warren Elsom

Tour specialist JC Nel is fired up to add the three-day Bestmed Jock Tour title to his palmares after winning the single-day Jock Classique in Nelspruit, Mpumalanga, two seasons ago.

The Johannesburg rider, who placed fourth overall in the inaugural edition of the 304km race last year, knows there will be no easy route to victory from July 15 to 17.

While RoadCover’s defending champion Willie Smit, who also won the Mpumalanga Tour this year, looms as a strong title contender to win his home race, Nel said he was looking forward to testing himself in one of the country’s most gruelling tours.

“The Jock Tour is the sort of race we don’t often have because it’s a really hilly route with a time-trial included and lends itself to a specific type of rider,” said the 24-year-old ProTouch rider from Honeydew.

“We don’t get a lot of opportunities to race a tour where it can be won or lost on time-trials or climbing. With myself being a climber and a time-trialist, we have put in a lot of work and I’m really looking forward to it.”

Nel said the Jock Tour provided a completely different examination than the one-day Classique, which is now a supporting event to the feature race.

“The Classique, which I won in 2014, is very different as it is fast-paced and everything happens so quickly and there is no room for error.

“The three-day tour on the other hand lends itself to more of a harder rider. You have to be absolutely prepared and completely focused to do well.

“I think, personally, I’ll be happy if I can walk away with a podium position.”

“We wanted to create an honest test for the country’s elite riders when we formulated the three-day race. There is simply nowhere to hide and the strongest rider will win – full stop.”

He said the 27km uphill time-trial between Nelspruit and the mountain town of Kaapsehoop on the opening day would set the tone for the event.

The second stage, a 140km haul from Nelspruit to Nelspruit via White River and Sabie, is largely the same route used by the Classique, which takes place on the same day.

De Villiers said the major climbing tests on this stage would be Spitskop (5km at 12%) and Long Tom Pass (12km at 10%), while the final day featured the most climbing with 3 100m of vertical ascent on the 138km round trip via Kaapmuiden and Barberton.

Nel identified Smit as the hot favourite along with fellow Nelspruit locals Gawie Combrink and Nico Bell. The latter was runner-up last year and the two teamed up to win the nine-day joBerg2c mountain bike race in April.

“And you will always find a couple of guys in the U23 age-group who are super keen and motivated,” said Nel. “They can make it tough so you don’t quite know what to expect.”

After a sluggish start to the year, he was confident that his preparations were on track for the Jock.

“The beginning of the year wasn’t the best. I did okay in the Mpumalanga Tour (he placed sixth) in January but overall I wasn’t where I wanted to be.

“But I have had a decent block of training and am feeling much stronger.

“The Jock carries a lot of weight in terms of how hard it is and everyone knows that if you have done well at the Jock you are a decent rider.

“It means a lot for a rider to win there.”