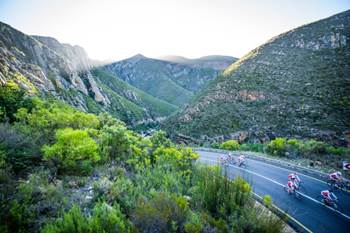 (Cape Town, 06 August 2015) The Cape Town Cycle Tour Trust (CTCTT) has announced a new entry process for the 2016 Cape Town Cycle Tour.  In line with international best practice, it will take the form of an online ballot system to eliminate the quick sell-out of entries and ensure a more equitable process for all prospective riders.

The free registration of interest in a ballot application will be possible from Wednesday, 09 September 2015 at 1pm to Friday, 25 September 2015 at 1pm. This will be preceded by a Pedal Power Association (PPA) ‘early-bird’ ballot via which PPA will allocate 5,000 entries, at random, to paid-up members.

David Bellairs, a director of race organisers, the CTCTT explains, “To honour PPA as founders of the event, its paid-up members will be offered an ‘early-bird’ opportunity to register their interest in an entry to the 2016 Cycle Tour.  Those who are unsuccessful in the initial PPA ballot will automatically be added to the general public ballot starting on 09 September, giving them an additional chance to be awarded an entry.”

Following the challenges faced during last year’s entry process – especially with entries selling out in a record time of eight hours – the online portal will be implemented to improve cyclists’ overall experience.  According to Bellairs, online ballot entry portals have proven successful at top European and American sporting events. “Such systems have become standard practice at key sporting events around the world, including the New York Marathon and Boston Marathon.  The Trust, along with its three co-naming rights sponsors – Cape Argus, Pick n Pay and Momentum – carefully researched and considered all options, and we are confident that our new process will serve riders well and further entrench the global appeal of the Cape Town Cycle Tour,” he says.

General entries will no longer be accepted on a first-come-first-served basis, but will instead involve a three-step process for all public entrants.  Corporate Group entries will also no longer be available, so those who have made use of these in the past will need to follow either the public entry process or take up the opportunity to support a charity, this year.

How to apply for a public entry to the 2016 Cape Town Cycle Tour:

For a period of two and a half weeks, from Wednesday, 09 September at 1pm to Friday, 25 September at 1pm, prospective riders (both local and international) can register their interest free of charge at www.cycletour.co.za.  Doing so amounts to an indication of interest only, and will not ensure entry, and will require prospective entrants to update their details at the same time.

Successful applicants will have until Monday, 26 October at 1pm to make payment and secure their entry.  Payment not received before this date, or the applicant’s option to decline the entry, will result in that entry being made available to a previously unsuccessful rider.  Local general entries will cost R470 per rider.

Bellairs continues, “We want to avoid thousands of applicants rushing to be first in line as the entry portal opens, and being disappointed when they sell out in a matter of hours.  Our intention is to create a fairer system as it allows for a greater and more inclusive opportunity for securing an entry. Entries will be awarded at random, regardless of whether interest is registered on the first or the last day of the registration period.  We believe the implementation of this new system is the best way forward for the Cape Town Cycle Tour,” concludes Bellairs.

As in previous years, a certain number of the entries will be made available via charity groups at varying costs.  International entries will remain open until February 2016, or until the allocation of 5,000 riders is reached, and will cost R800 each.

For any event queries, or assistance with entries, please contact the Cycle Tour Events Office during office hours on 087 820 7223 or visit www.cycletour.co.za.