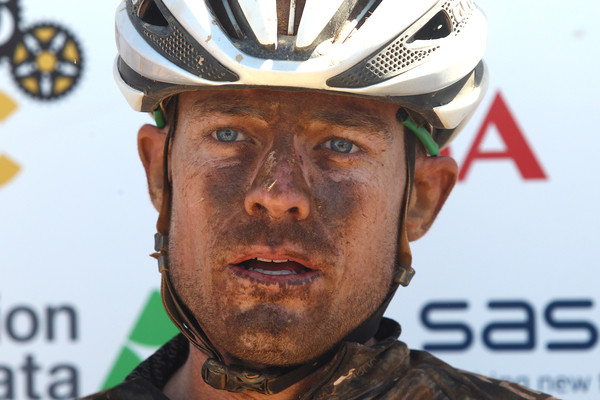 Darren Lill of RED-E Blend at the end of stage 3 during stage 3 of the 2015 Absa Cape Epic Mountain Bike stage race held from Oak Valley Wine Estate in Elgin to HTS Drostdy in Worcester, South Africa on the 18 March 2015 – Photo by Shaun Roy/Cape Epic/SPORTZPICS

The red Absa African special jerseys changed shoulders for the first time in the 2015 Absa Cape Epic on Wednesday when Darren Lill and Waylon Woolcock (RED-E Blend) put in their second compelling performance in two days.

Woolcock described the route as “one of the toughest stages with lots of sand and rocks … we did some running today”. He added though: “We felt good and strong and were the South African team who could stay the longest with the European teams. It really feels good to take the (Absa African) jersey. That is the goal for us.”

One of the favoured teams for the red jersey, RECM’s Erik Kleinhans and Nico Bell, has dropped out of contention and are now lying 27th overall after the former suffered from serious stomach problems during Stage 3.

The Masters category is turning out to be a fascinating battle, with Dorma/Robert Daniel’s South African pairing of Robert Sim and Nico Pfitzenmaier winning their second stage in a row. Their 12-second win closed the gap on category leaders Bart Brentjens of the Netherlands and Abraao Azevedo of Brazil (BETCH.nl-Superior) to under two minutres.

“It was a good day for us,” said Sim. It is a real ding-dong-battle at the moment between us and Bart and Abraao. The whole day we were battling it out. It was only in the last kilometer that we got a gap of some 10 seconds.” 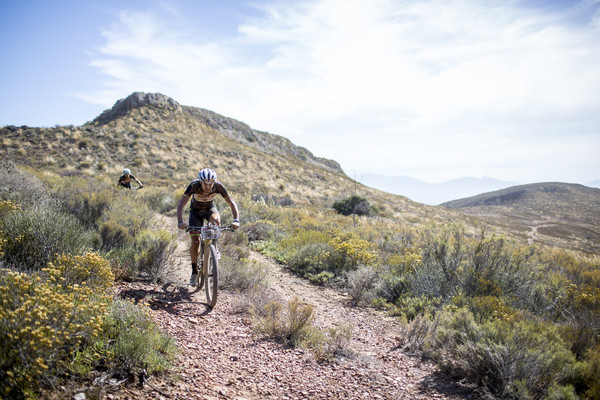 Waylon Woolcock and Darren Lill try to stay in contact with the bunch during stage 3 of the 2015 Absa Cape Epic Mountain Bike stage race held from Oak Valley Wine Estate in Elgin to HTS Drostdy in Worcester, South Africa on the 18 March 2015 – Photo by Nick Muzik/Cape Epic/SPORTZPICS

He added that the two teams are “very well matched and that is why the battle is so intense … it is a struggle to get a gap and there is lots of racing still to come.”

“My partner worked really hard today because he had chain problems,” said Kraft. “We also battled on our own for most of the day. It was a really tough day.”

ENS RH77’s Austrian combination of Rene Haselbacher and Sabine Sommer remain in second-place in the category overall in spite of finishing nearly seven minutes back  on Wednesday.

The race for the Exxaro special jersey has swung convincingly towards Phillimon Sebona and Jan Motshioa (Exxaro PWC) in the past two stages after pre-race favourites Sipho Madolo and Azukile Simayile (Investec-Songo-Specialized 2) dropped back sharply. They had another bad day yesterday and Exxaro/RMB’s Lucky Mlangeni and Tshepo Tlkou slipped past them into second overall in the race for the jersey.