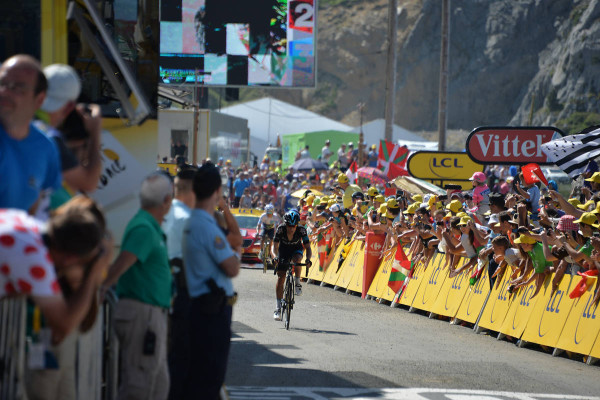 Chris Froome is as strong as a lion (nguvu kama simba in Swahili, the language he learnt in his native Kenya). He stormed to victory at La Pierre-Saint-Martin, the first summit of the Tour de France. Not only did he claim his fifth stage victory at the Tour de France but his lieutenant Richie Porte made the double for Team Sky, allowing the duo to start the second Pyrenean stage with the yellow and the polka dot jersey respectively. Froome has literally outclassed Nairo Quintana, Tejay van Garderen, Alberto Contador and Vincenzo Nibali.

183 riders took the start of stage 10 at Tarbes. Two non-starters: Ivan Basso (Tinkoff-Saxo) and Lars Boom (Astana). Pierrick Fédrigo (Bretagne-Séché Environnement) attacked at km 7.5, soon chased down by Kenneth van Bilsen (Cofidis) who bridged the gap at km 45. The peloton was led by Movistar at Artix, km 75.5, with a deficit of 13.55, when Warren Barguil (Giant-Alpecin) heavily crashed in the feed zone because of a musette. His right knee seemed to hurt badly but the Breton rider went back on his bike and made his way across to the peloton.

Fédrigo in action, Van Bilsen the most aggressive rider

Taking over from Movistar, FDJ sped up at the head of the peloton with Arnaud Démare 55km before the finish, showing Thibaut Pinot’s ambitions. The advance of Fédrigo and Van Bilsen decreased significantly. It was less than five minutes with 25km to go, 3.30 with 20km to go and 2.30 at the bottom of the ascent to La Pierre-Saint-Martin 15.3km before the finishing line. Fédrigo continued solo with 14km to go. 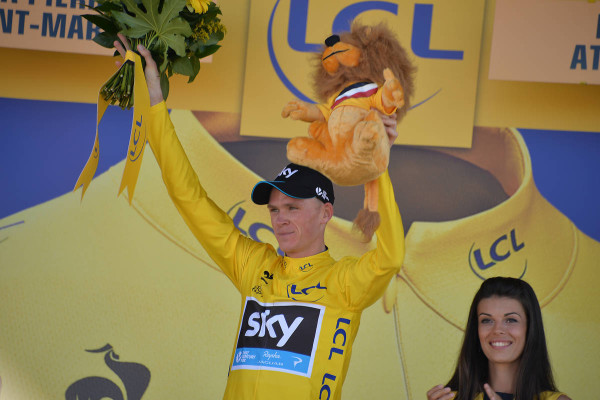 Froome soloes to victory with 6.5km to go

In the first third of the ascent, a few dark horse riders got dropped: Rui Costa, Dani Navarro, Wilco Kelderman, Michal Kwiatkowski, Andrew Talansky, Dan Martin, Romain Bardet, Thibaut Pinot, Jean-Christophe Péraud and Vincenzo Nibali. With 10km to go, Robert Gesink (LottoNL-Jumbo) rode away solo, chased down by Rafael Valls (Lampre-Merida) who rejoined him with 9.5km to go. Gesink was alone in the lead when he brought Fédrigo back with 8km to go but he was caught one kilometer further by Richie Porte, Chris Froome (Sky) and Nairo Quintana (Movistar) after an acceleration by Alejandro Valverde (Movistar). The Australian from Team Sky put the hammer down when he realized that Alberto Contador (Tinkoff-Saxo) was in difficulty. Froome soloed to victory as there were 6.5km remaining.

Porte deprived Quintana of the second place, which gives him the honor to wear the polka dot jersey in the second Pyrenean stage. The overall classification evidences huge differences. After only one climb in the 102nd Tour de France, Van Garderen is 2.52 adrift. Quintana is at 3.09, Contador at 4.04 and Nibali at 6.57.