Nibali takes back yellow as Contador crashes out of Le Tour 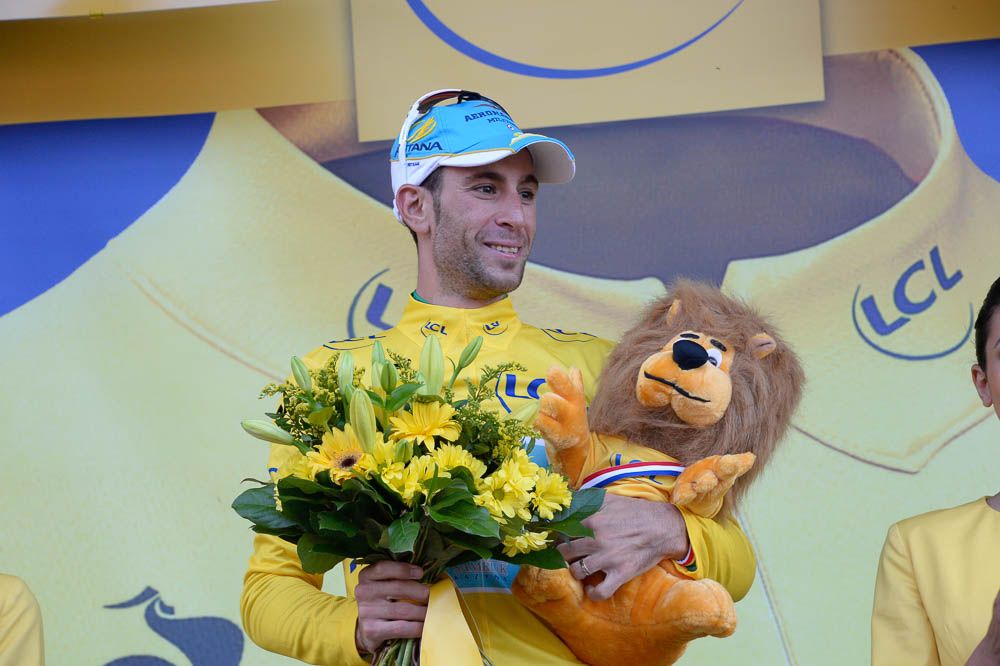 The speculations around an expected duel between Chris Froome and Alberto Contador have completely vanished. Five days after the defending champion, the Spaniard has been forced out of the race after crashing badly before the real fight between the favorites begun. Following the sad exit of the leader of Tinkoff-Saxo, the super favorite of the Tour de France became Vincenzo Nibali who caught the last attacker Joaquim Rodriguez with 1.2km to and took the yellow jersey back after the beautiful interlude of Tony Gallopin.

Voeckler and Rodriguez battle for the polka dot jersey

Lieuwe Westra (Astana) initiated the first breakaway soon after the start in Mulhouse. He was quickly joined by Giovanni Visconti (Movistar), Christophe Riblon (AG2R), Amaël Moinard (BMC), Thomas Voeckler (Europcar), Markel Irizar (Trek) and Arnaud Gérard (Bretagne), and at the beginning of the ascent to col du Firstplan by Joaquim Rodriguez (Katusha), Peter Sagan (Cannondale) and Jan Barta (NetApp). Michal Kwiatkowski and Tony Martin (OPQS), Rein Taaramäe (Cofidis), Reto Hollenstein and Marcel Wyss (IAM) rode away from the peloton in the downhill of the Firstplan. Voeckler and Rodriguez launched an interesting duel for the King of the Mountain competition.

Contador crashed and pull out

Alberto Contador (Tinkoff) crashed at km 62. It took him a long time to get back on his bike but he started a long chase escorted by his team-mates Daniele Bennati, Michael Morkov, Matteo Tossato and Nicolas Roche. Thirteen riders regrouped at the front at km 64 in the ascent to the Platzerwasel, as Kwiatkowski became the virtual leader of the Tour de France: Sagan (Cannondale), Kwiatkowski and Martin (OPQS), Riblon (AG2R), Irizar (Trek), Taaramäe (Cofidis), Wyss (IAM), Barta (NetApp), Rodriguez (Katusha), Voeckler (Europcar), Moinard (BMC), Visconti (Movistar), Westra (Astana). At half way into the stage, Contador called it a race and jumped into his team car after having insisted for about twenty kilometers despite his injuries.

Rodriguez soloes to La Planche but…

Kwiatkowski and Martin (OPQS), Riblon (AG2R), Taaramäe (Cofidis), Wyss (IAM), Rodriguez (Katusha), Voeckler (Europcar), Moinard (BMC) and Visconti (Movistar) remained at the front with stage 9 winner Tony Martin riding impressively again as he did most of the work in the leading group on the way to the col des Chevrères, the second last climb of the day. Rodriguez rode away solo in that climb but got caught in the downhill by Moinard, Kwiatkowski and Visconti. The Catalan rider from Katusha attacked again with 5.3km to go to the finish line as only Kwiatkowski was with him. He eyed his second stage win at the Tour de France after stage 12 to Mende in 2010 but Nibali attacked his rivals and caught him with 1.2km to go. The Italian went on to claim his second victory after stage 2 in Sheffield while Thibaut Pinot crossed the line on home soil in second position only fifteen seconds behind “The Shark of the Strait” who is back in the yellow jersey.