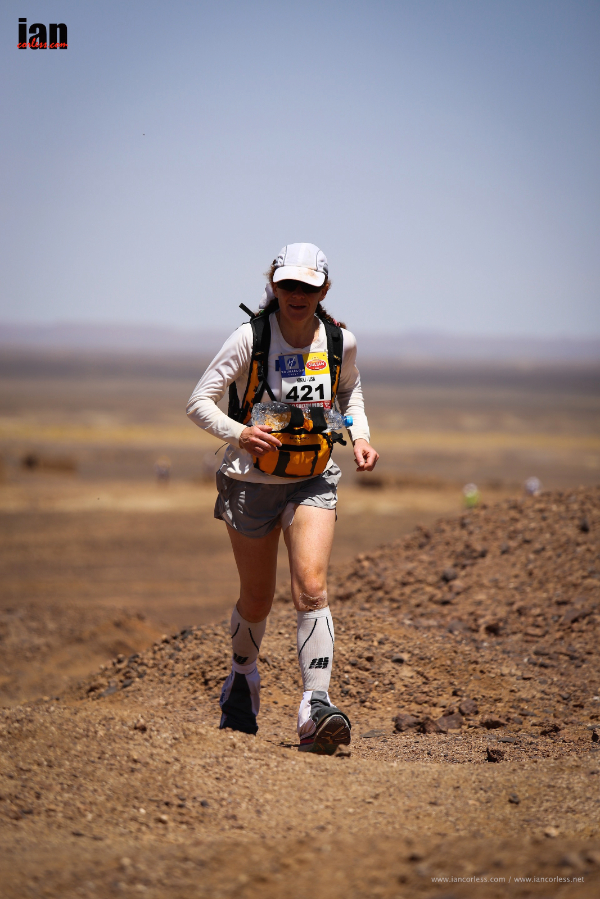 Nikki Kimball on her way to victory at the Marathon des Sables 2014.
All images by Ian Corless.

Nikki Kimball, current female champion of the 254km Marathon des Sables and three-time Western States 100 miler winner will be taking part in the four day, 150km Richtersveld Wildrun™ held during the first week of June 2015 in the /Ai/Ais-Richtersveld Transfrontier Park in South Africa.

Kimball, a resident of Boseman, Montana in the USA, is one of the most respected female ultra-runners in the world and her presence at the Richtersveld Wildrun™ is a fantastic opportunity for top South African runners to measure themselves against one of the best in the world.

A few of Kimball’s achievements include:

Closer to home, Nikki finished the Comrades Marathon in 2010 in an impressive 7:26:37. She is over the moon to return to South Africa before she heads to another Western States 100 later this year: “South Africa has had a special place in my heart since 2010 when I visited the country with teammates Kami Semick and Michael Wardian to race Comrades Marathon and raise money for Vukukhanye, an AIDS orphan charity in Chesterville near Durban,” said Kimball.

While the distance of the Richtersveld Wildrun™ is what Kimball is used to racing non-stop, she is excited by the opportunity to explore the truly unique landscape of the /Ai/Ais-Richtersveld Transfrontier Park – one of only 25 biodiversity hotspots in the world. “During my one and only visit to South Africa in 2010, we never reached the lands near the border of Namibia. Each of us wanted to explore the stark beauty of this area, and my one regret from our trip was the fact that we did not tour this area. Thus when given the chance to run Richtersveld Wildrun™, I had to change my race schedule to include this amazing event. I cannot wait to play in the arid beauty of this rocky, hilly, truly wild piece of Africa!” said Kimball.

About the Richtersveld Wildrun™
The 150km Richtersveld Wildrun™ takes place in the /Ai/Ais-Richtersveld Transfrontier Park over four days from 2 to 5 June. Starting and finishing at Sendelingsdrif, runners will get to experience a world of geological splendour. From the heights of Hellkloof pass, to the granite slabs of Tatasberg, the green swathe of the Orange River, the gargoyles of Halfmens Ridge and the crystal fields of the Sendelingsdrif plateau – every kilometre is unforgettable and participants are sure to leave the Richtersveld changed people. The Richtersveld experience is unlike any other in the world. Botanically, this area holds 40% of the world’s succulent species, many with incredible adaptations to the harsh mountain desert environment.

Wildrun™ stage races have become known as some of Southern Africa’s premier multi-day trail running events, and Owen Middleton, founder and managing director of the organising company, Wildrunner, is proud to see the interest in Wildrun™ events shaping up internationally, particularly with top-class runners such as Kimball. “We are absolutely thrilled to have Nikki on the start line this year! I have no doubt she will be enthralled and inspired by the magnificence of the Richtersveld mountains, the people and the event,” says Owen. “The Wildrun™ events offer a unique opportunity to run in truly wild places together with a limited field of 80 other adventurous and likeminded people.”

Since its inception in 2014, the Richtersveld Wildrun™ has had amazing support from Boundless Southern Africa and marketing manager, Roland Vorwerk was equally excited about Kimball’s decision to join this adventure. “We are looking forward to Nikki joining the field of runners experiencing the unique natural and cultural landscape of the /Ai/Ais-Richtersveld Transfrontier Park and meeting the communities associated with this innovative event. The Richtersveld Wildrun™ route includes many of the Park’s most spectacular features, and includes trails that very few people get to traverse.”

Peter McKuchane, general manager of Business Tourism in the Northern Cape said: “We are excited to once again host the Richtersveld Wildrun™ and to welcome exceptional world-class athletes of the calibre of Nikki Kimball to our province. Athletes will have an opportunity to experience the incredible beauty and warm hospitality of the people of the Northern Cape. The vast openness and rugged landscapes of this remote corner of the Northern Cape will create unforgettable memories for the participating athletes and visitors. We wish all the participants the best of luck in this destination of Extreme Adventure, Nature and Culture.”