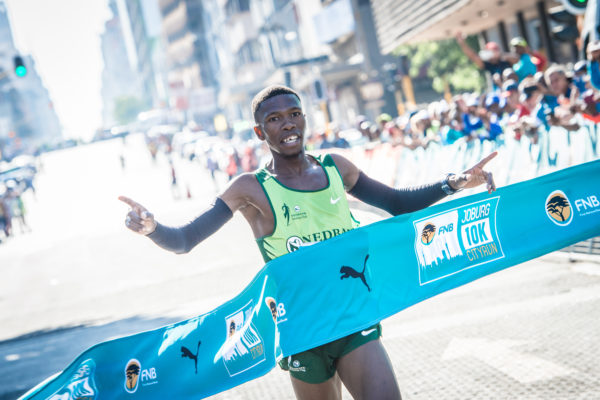 Nkhasi celebrated a string of 10km victories coming into the race and proved to be too strong on the day, covering the tough course in 29:48. The 23-year-old will be back in 2017 eyeing the top step of the podium after finishing second at the FNB Cape Town 12 ONERUN in May this year.

“These races (referring to the FNB Run Your City Series) are really exciting. The organisers always bring out some really tough competition. I’m looking forward to seeing who will come out and race against me in the streets of Jozi on 24 September,” said Nkhasi.

The Lesotho athlete holds the National Record for the 5000m and 10 000m and has represented the Mountain Kingdom three times. His biggest stage was the 2016 Olympic Games in Rio where he ran in the 5000m for Lesotho. In 2016 he picked up a Bronze Medal at the Africa Championships in the 10 000m in Durban.

Stephen Mokoka, who has just confirmed his entry into the inaugural FNB Durban 10K CITYSURFRUN on 8 October where he’ll be aiming to break his own SA 10km record, will also line up on 24 September. “We were tired last year. It had been a long season and Namakoe Nkhasi was too strong on the day. I do not like losing on home soil, so I will be better prepared this year. It would be great if I could win both the Johannesburg and Durban races, but I know that the competition will be tough. It always is in these races.”

Continuing to cause a stir in the South African road running circles, the event organisers are aiming to assemble the strongest possible field for both the FNB Joburg 10K CITYRUN (Sunday, 24 September 2017) and the FNB Durban 10K CITYSURFRUN (Sunday, 08 October 2017). Additional names will be released in due course.

Each entrant will receive a magnificent Event Performance T-shirt.

Charity Support: When entering online, runners can choose to support either or all three of the FNB Joburg 10K CITYRUN Charities: the Johannesburg Heritage Foundation, the Johannesburg SPCA and/or the Reach For A Dream Foundation.

FNB Business is proud to be the title sponsor of the FNB Joburg 10K CITYRUN.  This sponsorship forms part of our ongoing strategy to support local and community events that focus on a healthy lifestyle and family involvement. Road running is an inclusive sport that allows us to engage with a larger audience and support a sporting disciplines that advance our commitment to building, enduring and rewarding relationships with communities we are a part of.

We believe in supporting a race that encourages people to run and know their city; a race that strives to re-invent how people perceive and experience the city centre. The FNB Bank City buildings are well-known and iconic buildings in the Johannesburg CBD and the precinct was recently revamped in 2015 with three lifestyle concepts of Work, Eat & Play in mind. For many years it has been viewed as traditional banking headquarters; however the revamp has positively changed the experience of the precinct.

Sponsoring the FNB Joburg 10K CITYRUN is aligned to our belief in the importance of rejuvenating and reviving the city centre so it remains relevant and an important part of Johannesburg’s Heritage.