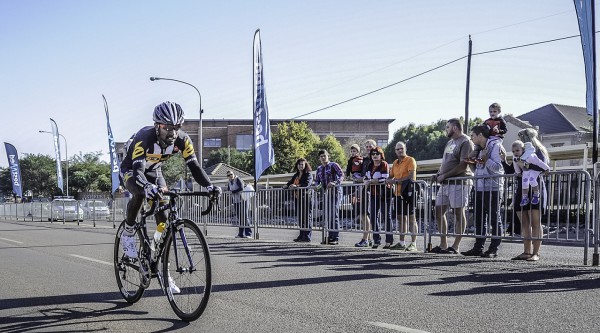 Former African road race champion Tesfom Okubamariam held his nerve and his line to sprint to victory in the inaugural 100km Bestmed Capital Classic, presented by ASG, in Pretoria on Sunday.

The Eritrean’s win in the first road race of the new Bestmed National Cycling Series puts him at the top of the standings.

Okubamariam, riding in the colours of the MTN-Qhubeka feeder team, crossed the line in 2:17:24 ahead of Pieter Seyffert (Altech Autopage-Karan Beef) and Dennis van Niekerk (Bonitas) at SuperSport Park in Centurion.

Europcar SA’s Willie Smit and Okubamariam’s teammate Nicholas Dlamini, who were also part of the decisive five-rider charge, were disqualified after taking the wrong lane and ending up parallel to the finishing chute.

Okubamariam, who is based at the World Cycling Centre Africa in Potchefstroom, said he was happy to finish the first half of his season on a high.

The 24-year-old will return to his home country next week to compete in his national road championships.

More than 2 200 cyclists turned out for the debut race, which covered an out-and-back route along the N14 towards Krugersdorp.

The first break of the day came after just 12km of racing, as an eight-rider group went clear of the peloton.

The major pro teams were all represented with Dlamini and Metkel Eyob for MTN-Qhubeka, Van Niekerk and Shaun-Nick Bester for Bonitas, Stuart Fitzpatrick and James Fourie for Europcar, Kevin Patten for Westvaal and Eckhard Binding for Aerocare Courant present.

The lead group rolled together over the undulating course to extend their gap to two minutes by the 37km mark.

Binding and Fitzpatrick slipped off the back and were eventually swallowed up by the chasing bunch, who were working steadily to close the gap.

At the turnaround point just before the intersection with Hendrik Potgieter Road, the six leaders’ margin had narrowed to just over a minute.

Shortly after halfway, Eyob and Bester attacked the break and went clear, putting more than a minute into their nearest rivals.

However, behind them their hard work was steadily being undone as the bunch came flying up the road to catch the small chase group first and then reel in the two leaders after 70km.

With 20km to go, Okubamariam and Dlamini launched their decisive attack.

Seyffert, Van Niekerk and Smit were the only ones able to follow the move and the five-rider split stayed away as they got back onto the Ben Schoeman highway and headed for the finish.

Krugersdorp-born Seyffert, who now lives in Helderkruin, said he knew the tailwind in the second half of the race would be decisive.

“We worked pretty well until about five kilometres to go when guys started sitting on and playing cat and mouse. I drove pretty hard.

“Unfortunately at the finish Willie and Nic took the wrong line, which was hard luck for them, but, at the end of the day, you have to follow the right route.”

Seyffert, who took the runner-up spot alongside Hanco Kachelhoffer in the recent nine-day Old Mutual joBerg2c mountain bike race, said he was very happy with a second place in his first road race back after a few years’ absence from the sport.

In the women’s race, an in-form An-Li Kachelhoffer of Team Activate went on a solo breakaway in the last 30km to secure an uncontested win in 2:45:28.

Her teammates Heidi Dalton and Lynette Burger controlled the racing behind her to take second and third respectively in 2:45:49.

Kachelhoffer, 27, said she had been feeling strong at the start of the race, as her preparations for the European racing season had been going well.

“We forced an early break and kept the pace high to make the race as hard as possible.

“Then I got away and just kept it rolling. I knew Heidi and Lynette were behind me and I had full confidence that they could take it if I was caught, but I ended up keeping the gap and taking it to the line.”

Former Pretoria resident Kachelhoffer, who recently relocated to George, said she had driven the route many times and was pleasantly surprised by what a great cycle course it was.

“Because it’s rolling and open and because you can see the road in front of you, it’s quite tough. It’s definitely an all-rounder’s route and you need to be strong to drive the pace over the top of the long drags.”