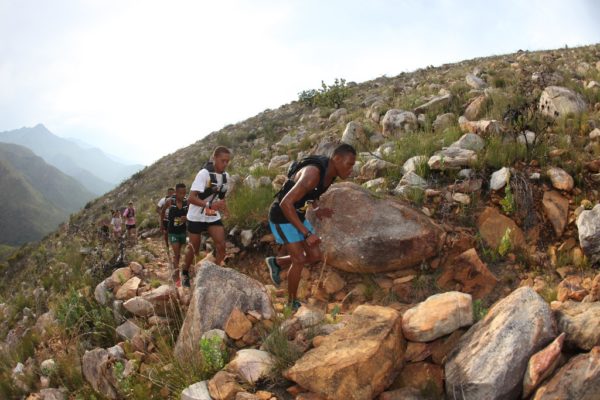 Ettiene Plaatjies and Gershwill Jacobs lived up to their billing as race favourites by claiming the 2017 Dryland Traverse title. Photo by Oakpics.com.

The 2017 Dryland Traverse, the four day Adventure Trail Run staged in the Swartberg Mountains from the 2nd to the 5th of November, was dominated by the local trail runners as Ettiene Plaatjies and Gershwill Jacobs ran home stage winners on three of the four stages. The event is about so much more than podium positions, but rather immersing oneself in the beauty of nature and spending time relaxing with fellow trail runners after each stage are the order of the event.

On the racing front Plaatjies and Jacobs lived up to their billing as pre-race favourites, the Oudtshoorn 1 pair claimed stage victories on the Prologue, Stage 1 and Stage 2. They were shadowed throughout much of the event by their Oudtshoorn 2 compatriots, John April and Francois Massaqua, only managing to establish a comfortable time gap on the long and tough Queen Stage. At 33 kilometres in length Stage 1 was always going to be the pivotal one in the race. The two Oudtshoorn teams worked together to distance their key rivals, Robert Rorich and Timothy Chambers (Team Sabrina Love), and JC Visser and Mauritz Janse van Rensburg (Soul Running). When Massaqua began to falter in the sweltering mid-30 degree Celsius heat Plaatjies and Jacobs forged on, completing the stage victory and building a comfortable 13 minute buffer in so doing. This allowed them to race conservatively for the next two stages, and even take a relatively relaxed approach to the final stage where they simply kept the men’s team category stage winners, JC Visser and Mauritz Janse van Rensburg in sight, to do enough to win the 2017 Dryland Traverse. April and Massaqua were second overall, in the category, while Rorich and Chambers finished third.

The women’s team race was the most tightly contested category of the Dryland Traverse; as the Twinzees team, of Claire van der Nest and Lindi Georgiou, started the event with two successive stage wins only for Nicky Steel and Kate Warner (Jog Squad) to storm back on the final two stages. Van der Nest and Georgiou overturned a 7 minute deficit with stage wins by 5 minutes and 4 minutes and 30 seconds respectively on Stage 2 and 3 to claim the 2017 Dryland Traverse title by 2 minutes and 17 seconds.

The mixed and solo women’s categories were far less disputed. The Less Bunny More Gazelle team of Danette Smith and Chris Walley dominated the mixed category with four successive stage victories while the solo women’s champion, Annalise Scholtz was 1 hour and 42 minutes faster than her nearest rival, as she raced to fifth overall in the combined solo categories.

The solo men’s race was nearly as competitive as the women’s team race; but for the eventual champion, Michael Bester’s, Dryland Traverse experience it could have come down to the wire. Bester was conservative on the Prologue, dominant on Stage 1 when the heat and the nearly 1 500 metres of accumulated altitude gain punished the rest of the field, showed every ounce of his champions’ grit on Stage 2 to reduce his losses to the flying Edson Kumwamba and then proved resurgent on the final stage to secure the category victory. Though highly favoured before the start of the event, First Ascent athlete, Kumwamba struggled with the extreme heat on the opening two stages. But with the experience now in hand he is likely to return to challenge Bester at the 2018 Dryland Traverse.

Outside of the racing the spirit of camaraderie and a relaxed long weekend away which makes the Dryland Traverse so memorable once again prevailed. Most of the trail runners taking part stopped multiple times a day for selfies or to take photos of the amazing views. Of scenes like the spectacular stalactites of the Cango Caves, or the blue/black folds of the Swartberg disappearing into the haze on the horizon. They also made time for cooling splashes in the mountain streams and three very brave souls even decided to run the final stage barefoot.

Taking up the challenge of running the 11 kilometre long final stage, which though it took in a riverside obstacle course was by no means soft underfoot, barefoot were the third placed men’s team of Rorich and Chambers, and Beth Hechter. They did not just run the route barefoot to prove a point – though given Rorich’s choice of trail sandals for Stage 2 nobody would have batted an eyelid at him completing the minimalist trend from shoes on Stage 1 to sandals on Stage 2 and barefoot on Stage 3 – but rather to raise funds for the Smile Foundation. With their fellow runners pledging R5 a kilometre the trio raised nearly R5 000 at the event and if you would like to further support their efforts to raise money to aid the Smile Foundation you can do so here or by visiting www.smilefoundationsa.org. The Smile Foundation is Dryland Event Management’s official charity partner and they help provide South African children, with any type of facial abnormality, to receive free corrective plastic and reconstructive surgery.