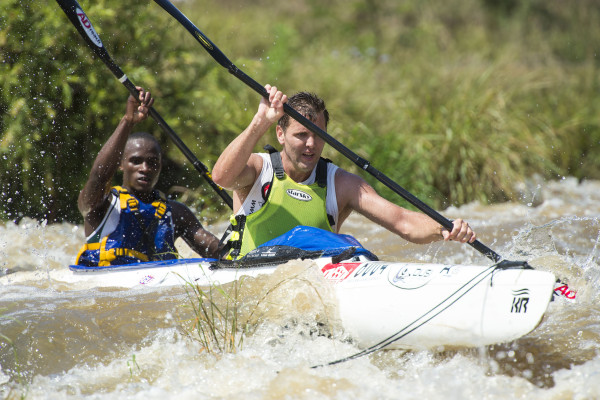 With the 2016 FNB Dusi Canoe Marathon season getting into full swing the ADreach pair of Len Jenkins and Siseko Ntondini will be looking to build on what has been a solid start at the Ozzie Gladwin Canoe Marathon, presented by Parklane Superspar, on Sunday 29 November. Anthony Grote/ Gameplan Media

Pietermaritzburg – The fledgling partnership of marathon racing kingpin Len Jenkins and Siseko Ntondini is blossoming into a force to be reckoned with and with the best ever record at the Ozzie Gladwin Canoe Marathon, presented by Parklane Superspar, Jenkins will hope that the pair can continue their good form on Sunday.

Although the race does not take place on any of the FNB Dusi Canoe Marathon route, it is one of the most important pre-Dusi seeding races and incorporates a number of the elements that paddlers will come into contact with when the iconic three-day race comes around in February 2016.

As the FNB Dusi build up season intensifies, many of the crews will be keeping close tabs on their opposition however Jenkins is more focused on himself and his partner and how they can keep their preparations for the 2016 Dusi on track.

“We are just looking to go out and have a good race,” a measured Jenkins said. “We are not putting any pressure on ourselves, which is a good thing, and just getting our preparation in order is key going into the race.

“We are not too phased about the other crews and we are just going to be focused on ourselves this weekend and just control our race from start to finish.”

The pair, who took on the recent Umpetha Challenge together where they ended in fourth place after leading for a large portion, will get back in the boat together this weekend despite the fact that they have been unable to train together with Ntondini being based in Johannesburg.

“We have both been training hard, even though we haven’t been in the same place and training together.

“Siseko is coming down to train with me sometime soon and then we will up our intensity.

“I know that he has been working really hard and is really focused on what we want to achieve,” added Jenkins.

The ADreach pair will have the experience of the 10-time Ozzie Gladwin winner to lean however, with Jenkins taking a sabbatical from competitive canoeing over the past few years, getting back into the groove is something that he is not too concerned by.

“We won’t be looking into the result this weekend too much because we are building slowly towards Dusi next year.

“Having said that, I don’t think that too much has changed and myself and Siseko are feeling good in the boat.

“Just having a good race is our main focus though!” Jenkins explained.

Ntondini understands the test that the pair face with them being in different cities.

Going into this weekend, the Soweto Canoe and Recreation Club (SCARC) competitor feels this is less of an issue now though than it was when they first took to the river together.

“Initially we found it tough not training together but now that we have paddled a few races together we are not as worried, even though it would be great being able to train together!

“I will be coming to stay in KwaZulu-Natal soon and then we will train together until the Dusi next year,” Ntondini said.

With a decorated partner in the boat with him Ntondini hopes that he can continue to learn from Jenkins and has found his input to be invaluable over the past few months that they have been a combination.

“Len knows how to win races and that is something that I have learnt from him and want to use in my own paddling.

“Gaining knowledge from him is vital for me and after the Umpetha Challenge he mentioned that we needed to improve our running and so that is what I have focused a lot on recently.

“Len’s results at the Ozzie Gladwin have been incredible and I am sure we will take a lot of confidence from that,” the SCARC star concluded.

The 2015 Ozzie Gladwin Canoe Marathon gets underway at 09h00 on Sunday, 29 November at Albert Falls Dam and finishes 26km later at Thornvale Farm. More info can be found at www.ozziegladwin.co.za

With the 2016 FNB Dusi Canoe Marathon season getting into full swing the ADreach pair of Len Jenkins and Siseko Ntondini will be looking to build on what has been a solid start at the Ozzie Gladwin Canoe Marathon, presented by Parklane Superspar, on Sunday 29 November. Anthony Grote/ Gameplan Media