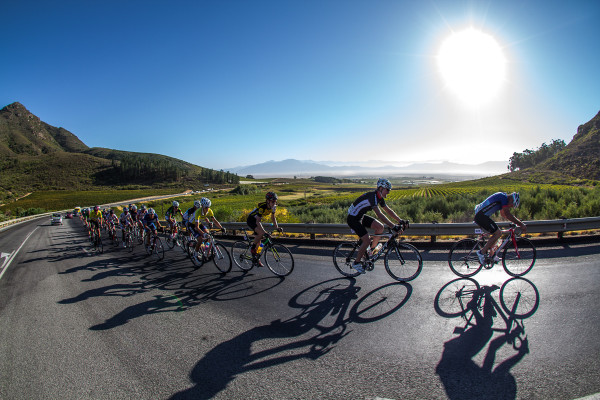 The five-day Bestmed Tour of Good Hope presented by Rudy Project will follow a clover-leaf racing format in and around Paarl from February 29 to March 4 next year. Photo: Capcha

Paarl, in the heart of the Cape Winelands region of South Africa, has been announced as the official host city for the 2016 Bestmed Tour of Good Hope presented by Rudy Project.

Situated 60km northeast of Cape Town, the seat of the City of Drakenstein will provide logistical and financial support for the five-day tour, which takes place from February 29 to March 4.

According to race organiser Wynand de Villiers of ASG Events, the tour is supported by Cape Winelands Cycling, sanctioned by Cycling South Africa and the parties are working together to obtain UCI accreditation.

“As the only sanctioned racing tour in the week leading up to the Cape Town Cycle Tour, it’s ideal preparation and a fantastic way to see the wine country.”

De Villiers said the town was surrounded by some of the most famous mountain passes in the country, which made it ideally suited to some world-class road racing.

“There are a number of iconic climbs on the route, including Du Toitskloof Pass and the well-known Four Passes Route, which goes over the Helshoogte, Sir Lowry’s, Viljoen’s and Franschhoek passes.”

He said the 515km tour – comprising an individual time-trial and four road stages – would once again culminate at one of Paarl’s most famous landmarks, the Afrikaanse Taalmonument.

“I’m not ordinarily a proponent of the clover-leaf racing format but Paarl unequivocally provides the exception to the rule with so many great venues, routes and passes.”

The host venue will be the historic La Paris Estate, midway between Paarl and Franschhoek, which dates back to 1699 and lends a distinctly old-world charm to the European-style cycling event.

“The Grand Hall is capable of hosting a thousand guests in a sublime setting, so the daily post-ride lunches are going to be marvellous.”

While the country’s major pro teams will be in action, organisers are also inviting open and seeded amateurs to enter individually or as part of a team.

“Entries are coming in quite fast now and we will unfortunately have to limit the field to a thousand riders across the various categories,” said De Villiers.

The Tour of Good Hope forms part of the Bestmed National Cycling Series, which offers a ranking and seeding system for South African cyclists.