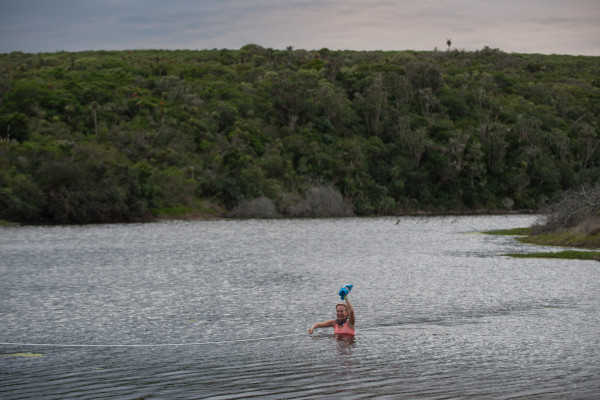 The JBayX is unique in concept, entailing three individual Trail Runs, all starting 12-hours apart, showcasing the best of the Jeffreys Bay area. The total distance covered, just over 60km. Entrants could choose to run one, two or compete in all three events. Images credit: Kody McGregor.

The Jeffreys Bay Xtreme 2-day / 3-event Trail Run which forms part of the JBay Winterfest kicked off at the Kabeljous beach on Saturday 11 Jul. Some 28 runners tackled the 20 kilometre first leg, which started at 07:00. The trail took them alone the beach at Kabeljous, through the dunes and into the singletrack trails of Papiesfontein farm. Conditions were cool and overcast with a light breeze – ideal for trail running. It was a close fought battle with Brad McKenzie eventually ousting Hilton Douglas on the final beach home stretch.

The JBayX is unique in concept, entailing three individual Trail Runs, all starting 12-hours apart, showcasing the best of the Jeffreys Bay area. The total distance covered, just over 60km. Entrants could choose to run one, two or compete in all three events.

“There were ten guys who are doing all three events,” commented Race organiser Rieghard Van Rensburg after event one. “That’s what we’re looking to grow, going into next year we want to have 40, 50 runners competing at all three events.”

The second leg saw 13 runners head off into the darkness at Impala Ranch at 19:00 that same night (12 hours later). Impala Ranch is a trail network built on a 1000 hectares of pristine countryside seven kilometres outside of Jeffreys Bay. The land has been a private game farm for the past 20 years with access only for family and friends of the landowner. During that time the farm has been regularly stocked with superb specimens of a wide range of animals. PE’s Bradley Hymen took out the win ahead of Capetonian Ryan Otto, with Mark Murray in third. Odessa Perelson ran a blistering pace to win the women’s race in a time of 02:11, coming in just 10 minutes after the men’s winner.

The third leg took the runners along the picturesque Seekoei River. The race started at 7:00 in chilly conditions. There was a bit of a breeze but overnight rain had subsided to make ideal conditions for fast running. The runners had to do various crossings of the chilly Seekoei River, but all were up for the challenge and most finished before the wind turned gale force and the rain returned.

“It was a phenomenal experience running the beach, in-land and along the river,” said Paul Hugo, the overall winner of the three-by-20km series. “The events were all very well organised,” he commented. “The most challenging was the night run. The course was very undulating and rocky and running that kind of tough terrain in the night was interesting,” he said.

“Then, on the last run we were in the river often.. waist deep, it was cold and windy, but that’s what it’s all about. This is a phenomenal concept that I think adds great value to the JBay Winterfest and has potential to grow.”

For more info and full results check out www.jbayx.co.za.