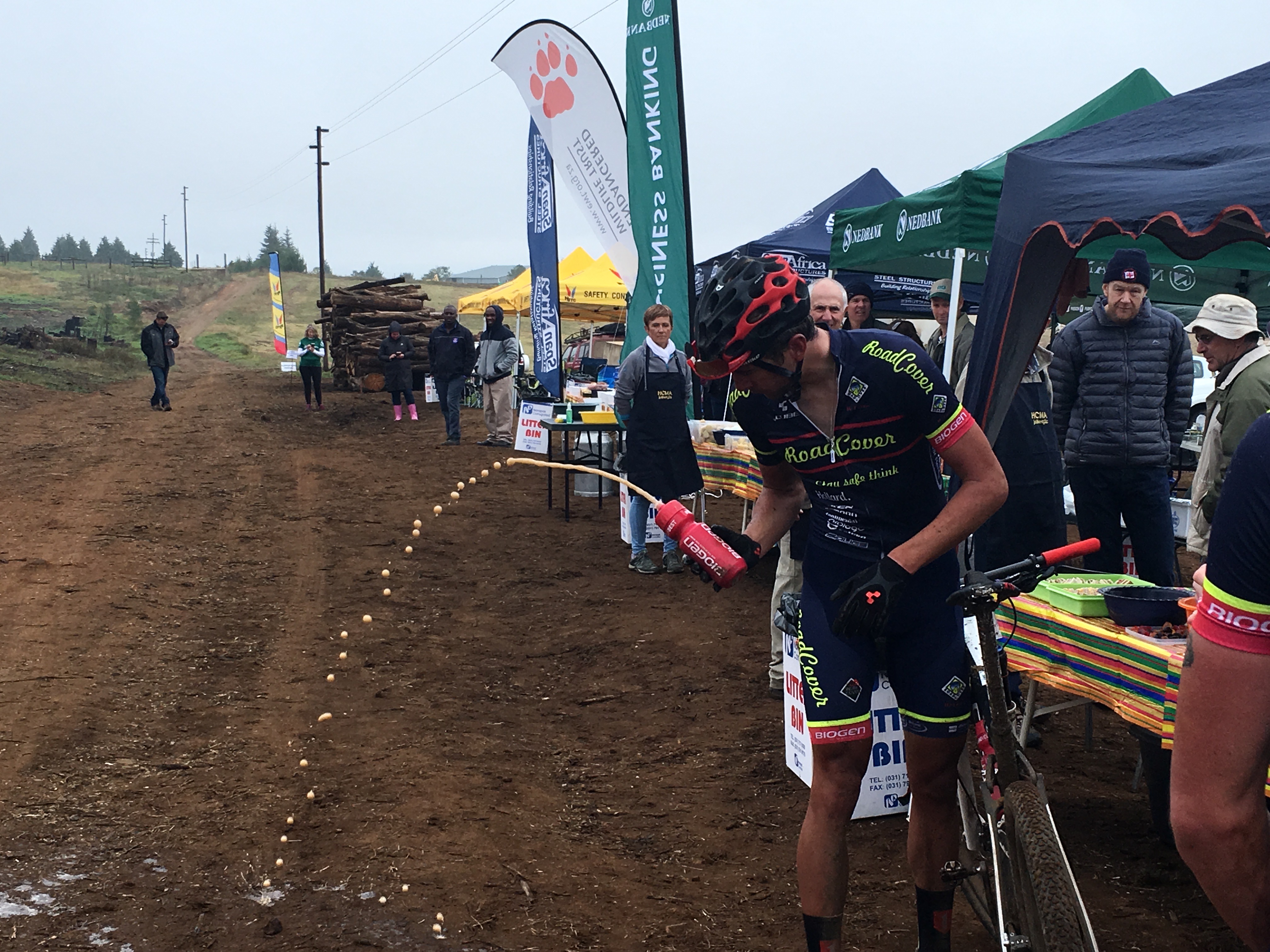 Although day 5 of the Old Mutual joBerg2c started cold and dreary, PYGA Euro Steel riders Matthys Beukes and Philip Buys had a day of sunshine thanks to an excellent ride and a stage win that also took them into the overall lead.

Early into the 120km day from Em’seni in Winterton to Clifton Preparatory School in Nottingham Road, NAD Pro MTB experienced a flat, and then again later in the day shortly after water point three.

PYGA Euro Steel finished the day with a time of 4:15:50 while NAD Pro MTB came in third, 14 minutes after the winners with a time of 4:29:50. Road Cover riders Brendon Davids and Willie Smit finished second at 4:21:29.

No mixing and matching

Dormakaba’s Darren and Candice Lill continues to lead the Lanham-Love Mixed Category, stopping the clock on day 5 at 4:48:22, with Grant Usher and Amy Beth McDougall (Lanham-Love Valencia) finishing second on the day in a time of 4:51:31.

Dormakaba’s leading lady, Candice Lill said it was a positive day, before adding, “Wow, it was actually quite cold today, and this was the only stage that I had chosen not to wear arm warmers. Although, there was enough climbing to keep us warm.

“We paced ourselves well and didn’t spend too much energy in the beginning – we knew all the big climbs were going to be at end and I can climb well, so I just rode my pace and kept it together.”

Darren, her teammate and husband saw nothing wrong with the day apart from some tired legs.

“I’m a bit tired but I feel pretty good actually. I’m just happy to keep the momentum going even though we took that start a bit easier today. We rode with the other two mixed teams and I’d say we stuck with Amy and Grant for the first 80km or so until the serious climbing started, and then we set our own tempo on the climbs and managed our effort from there to the line. I think our gap now must be fairly decent,” he said.

Despite Grant Usher’s strong ride for the Lanham-Love Valencia team, he confessed that the last few kilometres took it out of the duo and that the finish line was very welcome.

“It was nice and cool out there. But sheesh, the bagpiper coming up the last climb and bit of single track – it really makes you forget about all the toiling early on!

“It was a good day though and we rode in a nice group chilling a little bit and then Candice and Darren put the gas on with Nic White. They got a gap on us and despite our efforts of holding them, we just thought it wasn’t worth trying to chase back so we just consolidated again and enjoyed the day.

“On the other hand we were super strong, we rode away from the other men’s teams – it’s insane I think we’re probably still top ten,” added Usher.

Over the first few days of the joBerg2c, PYGA Euro Steel have said they would wait patiently for an opportunity like lions on hunt. And hunting was good today in the KwaZulu-Natal Midlands.

Though friendly with other top teams, Buys’ hunger for a win is more evident than ever.

“We wanted to take it easy today, but then things changed. We had seen Nico and Gawie stop and we thought they were having a toilet break or something so we just rode easy and sort of waited for them, but they didn’t come back. Then, we upped the pace and started going faster and rode a bit with the Road Cover guys until they dropped off. We got quite a lead on them,” said Buys.

He praised the great effort of his teammate saying, “Matthys did well today, but I struggled a bit. Mentally I’ve just been a little tired and in my head I was prepared for an easy day but then it turned out to be tiring. I didn’t have a good recovery day yesterday and I bonked a bit on the last 10 kilometres and I suffered a little bit. From here on we are just going to try and look after the bikes. We don’t want to get any mechanicals”

NAD Pro MTB’s poor luck today gave Road Cover a chance to cover some road, giving them the jump on Gawie Combrinck and Nico Bell for the day.

Brendon Davids said although they improved their time, it was a difficult day.

“Willie (Smit) had some issues. We got away with the PYGA guys and put the pressure on after Nico and Gawie got a flat. And then shortly after Willie’s cleat came loose so we had to stop at water point one to fix it, but it kept coming loose most of the way to the finish.”  However, it wan’t enough to slow Road Cover down too much, as they move into second overall behind PYGA Euro Steel, with NAD Pro MTB dropping from first to third.

If they want to catch up on day 6, they’ll have to work hard on the 98km stage from Nottingham Road to Glencairn Farm in Underberg. It’s a day that includes lots of climbing once again, including a particularly nasty bump named Gumtree Climb, because halfway up you’ll want to sell your bike on the classifieds website.