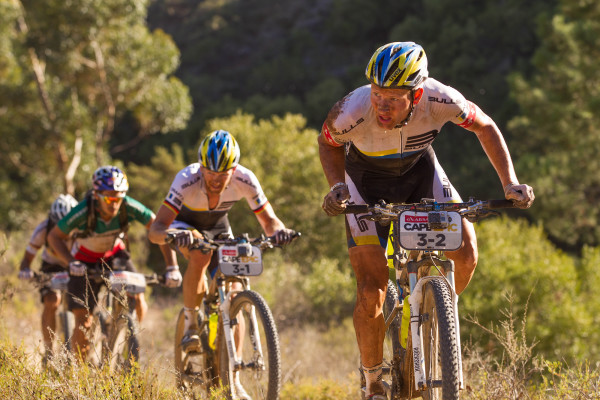 This year Platt will be back again with partner, Urs Huber, to try win his 5th Absa Cape Epic. – SPORTZPICS.NICK MUZIC.

“There is only one gas and that’s full gas,” laughs Karl Platt about the way he will be approaching the 2015 Absa Cape Epic. “I want to win it if possible.” His Team Bulls partner Urs Huber is also making no bones about their objective: “After a lot of bad luck last year we are coming to win it this year.”

In 2014 Platt seemed to be on track for a momentous achievement: beating his great rival Christoph Sauser to becoming the first person to win the Absa Cape Epic five times. After two stages the German and Swiss partner Huber were wearing yellow and looking exceptionally strong. But Platt had fallen and injured a knee on Stage 2 and the next day he could not pedal at full power. He eventually pulled out in considerable pain after starting Stage 4.

Three of Platt’s victories were with fellow german Stefan Sahm – making them the most successful team yet at the Cape Epic – and the other with Namibian Mannie Heymans, in the inaugural race of 2004.

He is convinced though that he and Huber have what it takes as a combination: “Over the last two years you could see that we make a good combination and work together very well. Now we need that little bit of luck.”

“I am an all-rounder. If I am in shape I can climb fast, downhill fast and go fast on the flats. But if I’m out of shape I can only downhill,” smiled Platt. “Urs’s strength is being very consistent. He had a superb season last year and is very hungry for his first Absa Cape Epic win. He is a Swiss and everything has to be very precise.”

For all his flamboyant manner, Platt is also methodical in his approach to the race. His wins with Sahm were built on a conservative approach: staying patient and then capitalising ruthlessly on opponent’s mistakes.

They will have the excellent pairing of Simon Stiebjahn and Tim Boehme riding in support, which could prove to be a trump card. German Stiebjahn and Swiss Boehme finished third last year after Platt pulled out and are a formidable backup team.

They are alert though to the strength of the 2015 field: “I see this year’s competition as one of the hardest and most exciting. There are at least five teams that will be fighting for the overall win,” said Platt.
Huber cautioned that they would need to fine tune their own team performance first and not worry about the others: “The team dynamic is the key factor for getting a win.”

They returned recently from a training camp in the Canary Islands where they had been riding six hours a day “with lots of climbing”, said Huber. Platt added: “Urs made me work hard, so I think it was good.”

They all also be racing the six day Andalucia Bike Race from February 22 before heading for South Africa and the Absa Cape Epic, an event that Platt describes as “the Tour the France of mountain biking … it’s first class”.

“We’ll be riding the 29er full suspension Bulls Wild Edge,” said Huber. “It is the perfect bike for the rough terrain in the Western Cape.”

“We will have the same frames as last year,” said Platt. “It is not a super aggressive bike in handling, which makes the bike smooth and safe even when you are a little tired.”