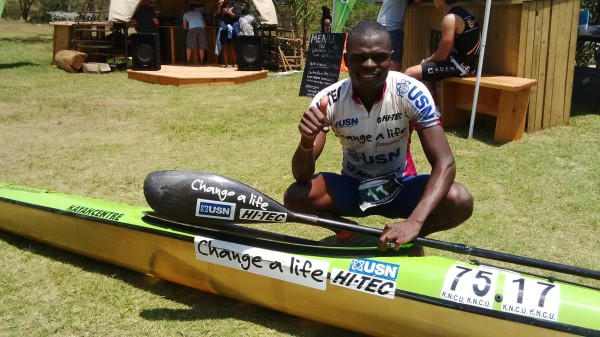 Computershare Change a Life star Nhlanhla Cele showed his diverse skills as he won the first ever Maqhwe Mfula Challenge which consisted of a 25km trail run, a 55km mountain bike ride and an eight kilometre paddle over the past weekend in the Valley of a Thousand Hills. Kevin Sawyer/
Gameplan Media

Durban – Whether it be on foot, on a bike or in a canoe the various Martin Dreyer Change a Life Academy (CAL) branches made their presence felt throughout KwaZulu-Natal and the Western Cape with some fantastic results this past weekend.

The inaugural Maqhwe Mfula Challenge took place in Change a Life territory, in the heart of the Valley of a Thousand Hills. This tough multi-disciplined event includes a 25km trail run, 55km mountain biking and a choice between a further 8km trail run or 8km paddle.

“Winning the Adventure was great!” said Ntuli. “It’s awesome having a race like this so close to home and although it was really hot, it wasn’t an issue for me as I am training in conditions like that as I prepare for the 1000km Munga MTB race in December.”

Ntuli, an experienced multisport campaigner having raced duathlon for Change a Life before the mountain biking team was formed, had a hiccup on his way to winning however his strength and a well thought out plan saw him through.

Keeping a steady, consistent pace was crucial and Ntuli managed to find that balance early on in his race.

“I chatted to Martin (Dreyer) before the race and we knew that pacing my race was going to be crucial, especially with the temperatures predicted to rise. So when the runners in the team category sped ahead, I stuck to my game plan, conserving and let them go.

“The bike was always going to be my strongest discipline so I made sure that I was feeling good for that and I knew that if I went behind on the run I could make up the time on the bike.

“I got a bit lost during the mountain bike leg and got frustrated. When I came into the transition I expected to have guys ahead of me but I was told that I was still in the lead which was a nice surprise!

“I just put my head down from there and dug deep to the finish line,” the former KwaZulu-Natal Duathlon champion said.

The RMB CAL Zulu’s continued to shine in the Maqhwe Mfula Adventure as Sizwe Mkhasibe finished second behind Ntuli, his performance highlighted by a gutsy final run after he was battling with cramp during his first 25km effort.

Not to be out done by Ntuli, Change a Life paddler and 2015 Non-Stop Dusi Canoe Marathon champion, Nhlanhla Cele, dominated throughout the Maqhwe Mfula Challenge – which substituted the final run with an 8km paddle.

With the biggest smile beaming across his face, he crossed the finish line unopposed in first place.

The Computershare Change a Life Zulu’s were also amongst the results of Sunday’s Umpetha Challenge, the first seeding race of the 2016 FNB Dusi Canoe Marathon.

The challenging season opener, which finishes on the top of the infamous Campbell’s Farm portage, is a great early Dusi form indicator and with CAL Zulu’s in seven of the top ten pairs, many of the academy will be feeling positive about their early season form.

It was a great early season showing from Change a Life’s Banetse Nkhoesa, who is teaming up with CAL ambassador and 2014 Dusi champion Sbonelo Khwela, as he got his first big win at the Umpetha Challenge, setting him up for a strong showing during the rest of the pre-Dusi season.

CAL’s Mthobisi Cele teamed up with Alan Houston to win the Under 23 category, closely followed by the impressive CAL crew of Mmeli Cele and Khumbulani Nzimande in second while CAL juniors Msawenkosi Mtolo and Thabani Msiya were full value as they wrapped up the U18 category.

To add to the academy’s performances, Sthembiso Masango and Mboneni Ngcobo rode themselves into a top ten finish at the recent FNB Wines2Whales over 1000 kilometres away in the Western Cape.

The pair competed against some of the strongest professional riding pairs in the country and finished seventh in the final stage of the race, giving them an all-important top ten finish in the general classification.

The other RMB CAL Zulu crew of Bongumusa Zikhali and Mazwi Smimango also managed to get themselves a respectable finish as they ended just inside the top 20 with a nineteenth place overall.

“What an incredible few days of performances!” beamed Dreyer. “It just goes to shows how hard work really pays off!”