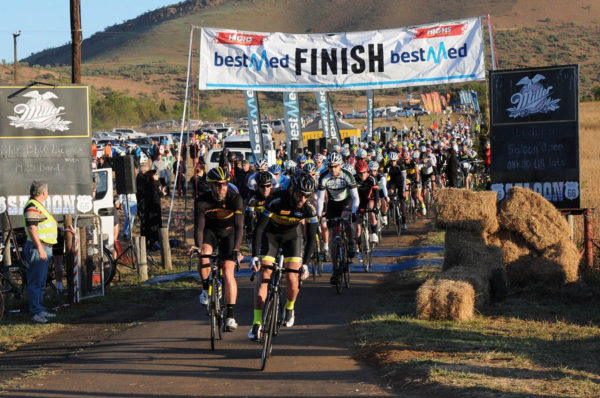 Improved infrastructure at the start and finish area will improve the experience for riders in the Bestmed Satellite Classic near Hartbeestpoort Dam on October 22. Photo: Supplied

Providing a premium experience for the riders is at the heart of the Bestmed Satellite Classic road race and there will be tangible evidence of that this year with an improved starting and finishing area.

This year’s road cycling extravaganza – which includes 60km, 80km and 106km events – will take place on October 22 near Hartbeestpoort Dam in North West.

ASG Events chief executive Wynand de Villiers said they had invested each year in the infrastructure since moving to the new venue at Saloon Route 66 three years ago.

“We have placed a lot of focus on ensuring a seamless experience for the cyclists,” he said.

“Specifically we have tarred a section of road to serve as the start and finish area.

“This year the tarred section will measure more than 500 metres and we’ve also made it a metre wider to ensure the riders do not experience any hassles.”

With about 3 000 participants expected to enter the three events, De Villiers said they were aware of the need to try to avoid traffic congestion.

“We have an agreement in place with the neighbouring farm to create more parking space so that we aren’t dependent on Route 66 alone for parking.

“We implemented the extra parking space last year and it really made a big difference.”

The ASG Events boss said the Classic had a “nicely balanced route” and provided a useful barometer of riders’ form heading into a number of big races – including next month’s 947 Challenge in Johannesburg – towards the end of the year.

“The first half is fast and riders get plenty of free ‘Voyager Miles’ if they can stick in their group,” said De Villiers.

“Once they hit Hekpoort 30km from the finish things change very quickly.”

He said the 4km climb at Hekpoort had an average gradient of 10 per cent and it was made even tougher because it came in the second half of the race.

“After Hekpoort the famous Poeierbult has to be overcome. Although it is only 1km in length, it’s a real challenge on tired legs.

“Due to the route we have set up, the overriding feedback from riders over the years has been that if you ride a good Satellite Classic, you’ll have a good 947.”

De Villiers said the less demanding 60km, which was introduced for the first time last year, would provide another option to riders “who may be a bit undercooked after the winter”.

“The 60km route is undulating, but it takes place on a beautiful road surface. It offers a wonderful alternative for the riders and is by no means a difficult ride.”